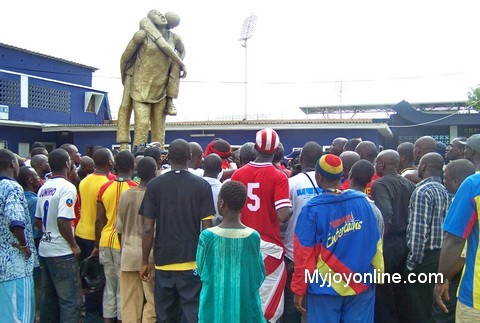 Some families of victims of the May 9th Accra Sports Stadium disaster that resulted in the death of over 120 people have accused government of neglect.

They claimed despite a directive by the Okudzeto committee that investigated the disaster that financial support be given to the families especially children left behind, nothing has been done.

They however singled out former chief executive officer of the Asante Kotoko, Herbert Mensah for praise for his contribution to their upkeep.

According to them 14 years after the disaster after a league match between Accra Hearts of Oak and Asante Kotoko, they still feel the pain and anguish they went through after losing their loved ones, and called for intervention.

At a special ceremony at Nima organized by Herbert Mensah who is currently the President of the Ghana Rugby Association and sponsors to bring the families of the victims in the greater Accra and the Ashanti region together, Rukaya Alidu who lost two brothers, Ahmed Samadu and Ibrahim Adi said apart from an amount of three hundred Ghana cedis extended to the family after the disaster nothing has been given to them.

“I am left to cater for the children of my late brothers and it’s very difficult because we do not know who to contact for the money promised us but I am grateful to Mr. Herbert Mensah for his yearly support,” Rukaya added.

Another person who lost his husband in the disaster said she was seven months pregnant when the news was broken to her.

According to Maame Bissi, life has not been the same since that day. “I was on a hospital bed when my family came for me and when we got home I was told of the disaster and the death of my husband,” she recalled.

Maame Bissi whose daughter is now 14 years old said the government has failed to carry through its promise to cater for the education of children of those who lost their lives in the disaster.

“Life is difficult because I was not working and also suffered injury to my spinal cord which left me paralyzed for months but the intervention and financial support from Mr. Herbert Mensah whom I consider to be my uncle saved me and if I am able to stand on my feet today it is through his benevolence,” madam Bissi intimated.

Herbert Mensah who has made it a ritual to observe the day every year is however saddened by the lack of respect to the departed ones and the needed attention to the surviving families left behind.

“I was in London recently where I met the ladies at Hillsborough who are fighting the government over the disaster that took place at Liverpool and they told me they are in court because they have the support of the people of Liverpool and that to me was a powerful statement but the same cannot be said about Ghana.”

Herbert Mensah who has financed the yearly remembrance on his own said the authority in Ghana must stand up and take responsibility for their action.

“People in power must realize that they are in power to serve the people and they must understand that there is a bar of acceptability globally that Ghana is entitled to,” Mr. Mensah added.

Meanwhile over 15 thousand people are expected to take part in a walk on Saturday to mark the 14 anniversary of the May 9th disaster in the Ashanti regional capital, Kumasi. Aside the walk the team will join the Muslim faith to pray at the Kumasi Central Mosque on Friday to be followed by an inter Zongo soccer match ahead of the walk in Kumasi