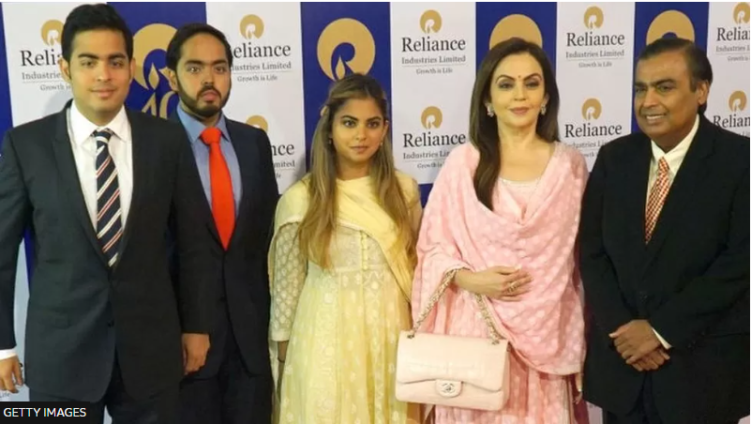 Mukesh Ambani (right) with his wife and three children

In the clearest hint of a succession roadmap, Indian billionaire Mukesh Ambani carved out definite roles for each of his three children at the annual general meeting of his $220bn (£193bn) retail-to-refining conglomerate in August.

Corporate India’s most anticipated leadership transition – Reliance is one of India’s most valuable companies by market valuation – has been in the works for some time. The particulars of the impending wealth transfer are sketchy at the moment, and largely in the realm of speculation.

But what is palpable is Mr Ambani’s desire to avoid repeating history: the acrimonious inheritance battle he waged with his younger brother 20 years ago, after their father died without leaving a will.

Isha Ambani’s leadership role is also in stark contrast to the largely peripheral role that other women from her family have played in the core business until now.

Over the past two decades, there has been a generational shift in the number of prominent Indian industrial families bringing women into the corner office – though analysts say there is still a long way to go.

Mr Ambani, 65, is actively involved in running Reliance as its chairman and managing director and could have bought more time before thrusting his children into the limelight.

But unlike many Asian patriarchs who hold a tight control over their wealth till the end, he represents a “new generation of family business leaders” in Asia who’ve witnessed succession feuds and want to take “every step possible” to make the journey for their children smooth, says Prof Kavil Ramachandran, a senior adviser at the Thomas Schmidheiny Centre for Family Enterprise at the Indian School of Business.

From the Tata group – which owns Jaguar and Land Rover – to the Singhania family that’s behind the textiles major, Raymond Group, India Inc has seen a series of rancorous succession battles. These have led to messy lawsuits and long-winded arbitration proceedings that have proven to be costly to shareholders.

But wealthy Asian families like the Ambanis are once bitten, twice shy, experts say.

The issue of intergenerational wealth transfer is also “gaining even more significance in a Covid-19 context,” according to wealth consulting firm Hubbis.

While fewer than half of Asian families have succession plans in place, the pandemic has encouraged 84% of India’s ultra-wealthy to reassess how they will transfer their wealth, global property consultancy Knight Frank estimates.

What’s also being reassessed, it appears, is the role of women in succession plans.

Speaking of the leadership roles his three children were assuming, Mr Ambani in his speech said “they are first among equals in a young team of leaders and professionals who are already doing amazing things at Reliance”.

Isha Ambani’s rise as an “equal” to her brothers is a clear shift from her older female relatives – her aunts got married into other business families long before the inheritance dispute split the Ambani family.

But Ms Ambani, a Yale graduate who worked at the consulting giant McKinsey, has been groomed to join the Reliance empire.

Given the influence the Ambanis wield, especially within the traditional Gujarati mercantile community they belong to, this gender shift is likely to have a “strong messaging effect,” Prof Ramachandran says.

It’s “a significant move that will set the tone for other business families, ” says Sandeep Nerlekar, founder and managing director of the legacy planning firm Terentia. He has been advising family-owned corporates on succession plans for over a decade.

Ms Ambani is part of a new generation of women from major business families who have taken on senior leadership roles. This includes Nisaba Godrej, who leads one of the country’s oldest diversified conglomerates; Nadia Chauhan who heads Parle Agro, one of India’s top consumer goods companies; and at least half a dozen others.

There are several forces behind the change, experts say – including more women accessing higher education, and traditional joint families giving way to nuclear ones.

More women are also “being vocal about their rights and capabilities without worrying about feathers being ruffled”, says Dipali Goenka, managing director and CEO of Welspun India, part of the $2.7bn Welspun Group, one of India’s biggest textile companies.

Ms Goenka got married at the age of 18 and joined her husband’s business after her children grew up and she decided to study management at Harvard Business School.

But there is still a long way to go.

Eight in 10 families in India still continue to harbour a bias towards sons when it comes to estate planning, Mr Nerlekar says, citing a Terentia study. “Even wealth distribution between a daughter and a son is not equal,” he adds.

The bitter public battle for a board seat by Valli Arunachalam, one of the heirs to the Chennai-based Murugappa Group, only underscores how difficult it is for Indian women to break through the glass ceiling.

Legal changes – to Hindu succession laws for instance, which gave women equal inheritance rights, irrespective of marital status – have helped smooth the way for women, experts say. And government rules requiring women to be included on company boards is increasing representation as well

But experts say this is a battle against patriarchy – and it has only just begun.