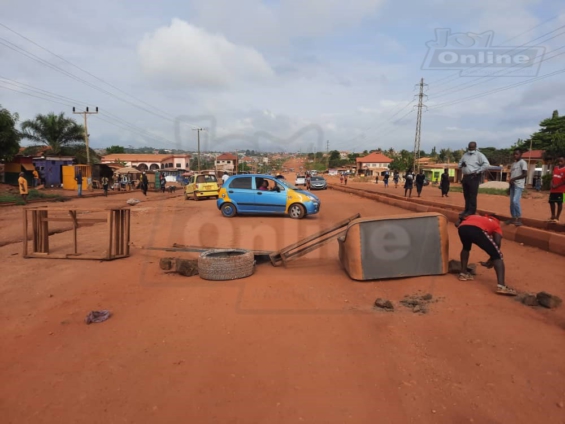 Angry residents of Atwima Kwanwoma in the Ashanti Region have staged a demonstration in the wee hours of Tuesday in protest over stalled construction of their road, which started in 2017.

They blocked the major link road compelling motorists to seek alternative routes to their destination.

The demonstrators are unhappy with the government for failing to progress with the road construction.

Commercial drivers suffered the action. Some abandoned their vehicles in the middle of the road to join demonstrators.

Commuters had to end their journey midway, and others sought alternative routes, some of which were also blocked.

School buses, picking pupils on the stretch, had to end the journey.

The roads here are bumpy and dusty following long abandonment by the contractor.

Some bridges are left uncompleted, causing floods in some parts of the area.

In the heat of the 2020 electioneering, the Chief of Foase, Nana Frimpong Appiah Ampem II, appealed to President Akufo-Addo during a campaign tour to ensure contractors expedite action on the Atwima Kwanwoma roads.

President Akufo-Addo assured works on the road will be completed after the Roads Minister, Kwasi Amoako-Atta, had indicated a contract had been awarded.

He revealed that contractors Asabea Construction will return to the road to complete work within a week after the visit.

But the road is yet to see any improvement six months into President Akufo-Addo second term.

It took police and military intervention to clear the road after two hours of demonstration.