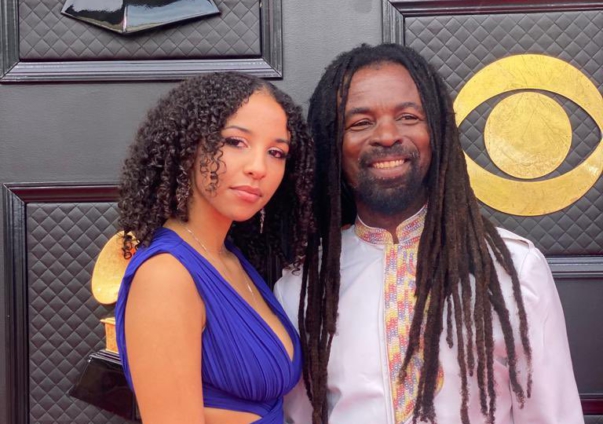 The artiste graced the event’s red carpet with his daughter Safiyah Dawumi.

Rocky Dawuni showed up to the Grammys in a kaftan while his daughter wore a blue dress with matching accessories.

The singer’s ‘Voice of Bunbon Vol. 1’ was nominated for Best Global Music Album but he lost to Beninese singer Angelique Kidjo.

During an interview on the red carpet, the two-time Grammy-nominated musician said he felt amazing to be representing Ghana on the global stage.

“Ancestors are with us, the wind in our sails and we feel that every step that we take is in lockstep with their intentions. So, we are privileged to be here to represent a music tool that tries to bring people together,” Rocky Dawuni added.

Rocky Dawuni’s Red Carpet interview at the 2022 GRAMMYs 🇬🇭🇬🇭🇬🇭@RockyDawuni be making us proud. We wish him all the best!#GRAMMYs pic.twitter.com/4KhLl7YO2Z

Meanwhile, this win by Angelique Kidjo is her fifth Grammy Award.

The celebrated singer and the South African choral group Ladysmith Black Mambazo are now tied in most Grammy wins by an African artiste.