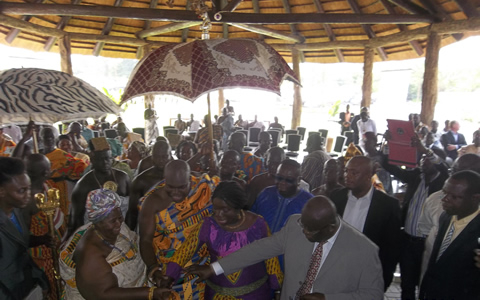 After hosting the three-day National Economic Forum, the  Royal Senchi Resort Hotel, which has become a household name, has officially opened.

Royal Senchi chalked recognition following  the several compliments from participants of the forum as one of resorts with the highest standards of hospitality services in the country.

Speaking at the official opening of the plush four-star resort facility in Senchi township located in the Asuogyaman District of the Eastern Region, its Executive Director, Kwame Afari-Yeboah, said the sophisticated nature of Ghana's land tenure system was not good for business.

According to him most investors are unable achieve their business goals after establishing their business due to the difficulty and litigation associated with land acquisition.

"All too often, investors come up against land litigation and are often pitted against multiple owners with its ensuing costs and court cases. It is my hope that government will continue the good work of ensuring a proper land tenure system for our nation", he said.

The Royal Senchi, built in 2011, is a luxury hotel infused with the serenity of the Volta Lake complemented by the highest standards of a hotel services.

Designed to blend into an appealing  environment, the 84 capacity guest rooms and suites is located a distant from the hectic city life, yet near enough for easy commuting.

Performing the official opening ceremony, Tourism Minister, Elizabeth Ofosu Adjare, noted that the facility has boosted the fortunes of the tourism sector.

According to her Ghana's tourism product is basically dependent on the country's culture and creative art potentials.

She stated that government has further strengthened the tourism public sector by promulgating the new tourism law, Act 817, which has transformed the former Ghana Tourism Board to the Ghana Tourism Authority with greater responsibilities, broader mandate and enhanced powers to organise and regulate the industry.

She explained that hitherto tourism facilities such as golf courses, beach recreational facilities, commercial swimming pools, events and conference managements as well as movie houses were outside the mandate of the Ghana Tourism Board but now falls under the supervision of the Authourity to ensure that the component part of tourism are gradually brought under one umbrella for effective control and monitoring.