Russian invasion must not succeed – Archbishop 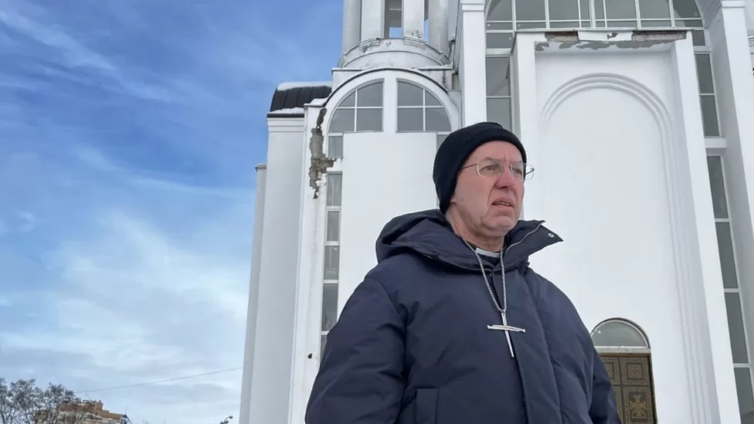 The Archbishop of Canterbury has said Ukraine must not be forced to accept a peace deal with Russia, whilst on a visit to the war-torn nation.

The Most Reverend Justin Welby told the BBC “justice demands that there is defeat” of “an evil invasion”.

He visited Bucha where evidence of atrocities and civilian killings were found after Russian troops withdrew.

It comes as millions of people remain without power or heating due to Russian attacks on Ukraine’s power grid.

The most senior cleric in the Church of England is highlighting the need for support for the country ahead of a tough winter.

“It [Russian invasion] must not succeed,” he told BBC Radio 4’s Today programme on Friday.

“The people of the west need to realise the cost of this war in inflation, in all kinds of difficulties… we need to be really tough about this.

“Peace is always better than war”, he continued.

“But there are times when justice demands that there is the defeat of what we call… an evil an invasion. And I don’t regret saying that.”

The archbishop visited the city of Bucha which was occupied by Russian forces for several months earlier this year.

When troops retreated in March, evidence of civilians being killed – a war crime – were found.

The archbishop was clearly moved by his trip in Bucha where he paused in contemplation at a spot where 116 bodies were discovered, and he was shown photographs of dead bodies that had been found in the streets after Russian forces left – some with their hands tied.

He also visited the so-called Bridge of Hope – which was the only route out of Russian-occupied Bucha and neighbouring Irpin in March, and where local priests helped people escape under fire.

He suggested there could be no peace in Ukraine until Russia “stops lying” about what it is doing, including the massacre of civilians in Bucha.

One of Russia’s claims is that the killings were staged by Ukraine and its allies.

“There were atrocities committed here. There will be no peace until we stop lying.

“We have to tell the truth however painful. There can be no way forward based on lies.”

DISCLAIMER: The Views, Comments, Opinions, Contributions and Statements made by Readers and Contributors on this platform do not necessarily represent the views or policy of Multimedia Group Limited.
Tags:
Archbishop of Canterbury
Justin Welby
Russian invasion
Ukraine War