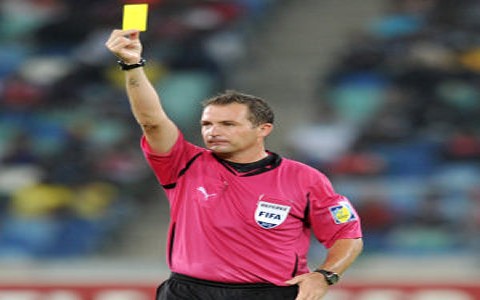 Refereeing in SA is in crisis today after all but one of the country’s top match officials failed their pre-season fitness tests, according to a report on the daily newspaper the Sowetan.

The daily paper reported on Tuesday that only Daniel Bennett – who is earmarked for potential World Cup action in two years’ time – passed Sunday’s physical tests at the start of the annual pre-season workshop from the list of an elite panel of officials.

A total of 14 of the 25 referees who underwent the test failed and by rights are now ineligible to officiate at matches in the Premier Soccer League (PSL) or the National First Division (NFD) for the next six months.

“It was carnage on the track,” one official at the Fifa-conducted tests is quoted by Sowetan, adding that the tests proceeded two days of lectures for a total of 80 officials – referees and linesmen.

The majority of referees who were successful in the running tests at the Boksburg Stadium are young and inexperienced, officials said. This puts both the SA Football Association (Safa), who oversee the refereeing structures, and the PSL in a dilemma.

There are two options ahead:

To bend the rules and allow a retaking of the tests to get more experienced referees onto the panel before the start of the new season. This would go against the strict policy over recent years that has seen officials like Damon, Theron, Yugesh Anjith and Matthew Dyer sitting out large stretches of the season.

The second alternative is to stick to the rules and promote junior officials to take charge of PSL matches, where they are bound to make more mistakes in the pressure cauldron of PSL competitions, thereby raising the ire of the clubs.

Last season, clubs complained bitterly about a perceived decline in the standard of officiating, although referees and their assistants come under much more intense scrutiny these days. The crisis also raises questions over the efficiency of current refereeing structures.