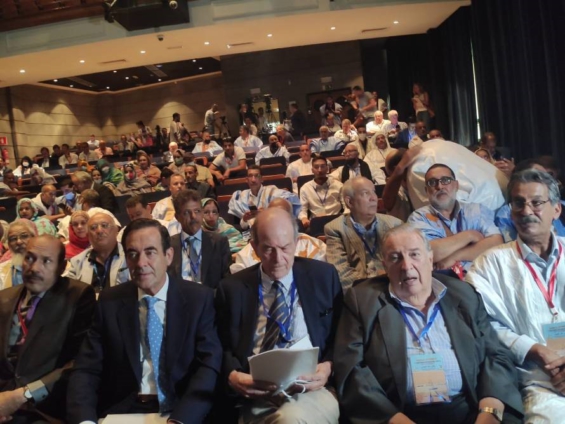 The Sahrawi Movement for Peace, created in April 2020, as a political movement is organising its first international conference on September 22 and 23, 2022, in Las Palmas.

Below is a press release by the group

These two days, we met to talk about our dear Sahara, not of the long and challenging path taken so far, but rather about the bright future that awaits us and promises us well-being and prosperity. A future to all and for all Saharawis. A future that will be ours if we accept the winds of change blowing from the Sahara.
A future that, ultimately, will help us overcome the dark times marked by suffering and disappointment that obscured a clear horizon. An endless journey to nowhere, on which we were embarked by people who served their interest to the detriment of Sahrawis’ general welfare, thus prolonging the conflict indefinitely.
We are before a historic and special day. We gathered at the Beautiful Gran Canaria, in the presence of members of the traditional Sahrawi authority, renowned politicians, and academics. We are in the company of those who want to take part in the solution and refuse to be part of the problem. We are faced with a wave of reasons to believe in change.
Indeed, we have the opportunity to contribute to this change. For this, we consider that it is necessary and vital to adopt and encourage the mechanisms that already exist for the resolution of the conflict as soon as possible:
1° Build confidence in the role of the UN as a central component to a compromise solution. In this sense, we consider that it is essential to create more spaces for dialogue with the participation of new leaders, such as Sahrawi notables, the Sahrawi Movement for Peace, or any other political movement, to break out of the vicious circle and intensify efforts to seek an agreement for this dispute.

We must also support the UN special envoy, Mr Staffan de Mistura, and urge him to exert more effort to move forward constructively in resolving this interminable political process and avoid the conflict returning to stagnation. Finally, we urge Mr Mistura to invest effectively in enforcing the ceasefire toward preventing further loss of life.

2° Welcome and positively read the new position of the Government of Spain on this issue. In this respect, Spain’s exit from its traditional “negative neutrality” reinforces and promotes its role as the main intermediary in a Spain-European Union dynamic, for a more profound commitment of the EU in favour of the resolution of the conflict.

We hope that the Spanish Government does not give in to pressure from those who want to perpetuate this situation. In this regard, we ask the politicians and political parties of the Spanish opposition to adopt a more constructive and less selfish position towards this matter, which is above settling scores and electoral calculations, as it is a sensitive matter.

3° Highlight and strengthen the role of the traditional Sahrawi authorities, represented by notables and sheikhs whose tribal authority has been called into question by another party as a way to claim the right to represent the Sahrawi population under an “eternal right”, without any democratic or legitimate process.
4° Prevent the negative effects that the perpetuation of this situation can cause. Undoubtedly, the ongoing tension in the region is detrimental to both sides of the Atlantic-Mediterranean axis. Put an end to this situation as soon as possible, considering that it will ease tension and stabilize the region in a world marked by politico-military upheavals. Work to establish stability that will also benefit the Canary Islands, particularly in terms of cultural and economic exchange with our neighbours and brothers.

5° Finally, to remember in a very particular way, all the families that were divided for decades due to the intransigence of a minority. It is, therefore, crucial to find a solution that guarantees, all at once, immediate family reunification, a dignified life, and social progress for the Sahrawi population, in addition to the power to enjoy the goods of their land, leaving behind the shortages of exile in the desert. We believe that the autonomy proposal is the starting point toward a compromise solution and a new era that offers the possibility of prosperity in peace for all of us.

These are the foundations of the change we seek. Today, we are here to set in motion that change. A change that aims to build a better Sahara, made by and for the people. The time has come to reaffirm our compromise.

Our story is a story of struggle against adversities and surpassing oneself. It is a story of collective effort marked by joint work and which will serve to build a better future. A story that must be set apart from the curriculum of toxic and inquisitorial leaders, whose failure as leaders is documented and evidenced by facts. It is the story of the desert people who still believe in a solution. We are still in time to end this disgrace.
Thank you.
Las Palmas de Gran Canaria, September 23, 2022

DISCLAIMER: The Views, Comments, Opinions, Contributions and Statements made by Readers and Contributors on this platform do not necessarily represent the views or policy of Multimedia Group Limited.
Tags:
Las Palmas
Sahrawi Movement For Peace