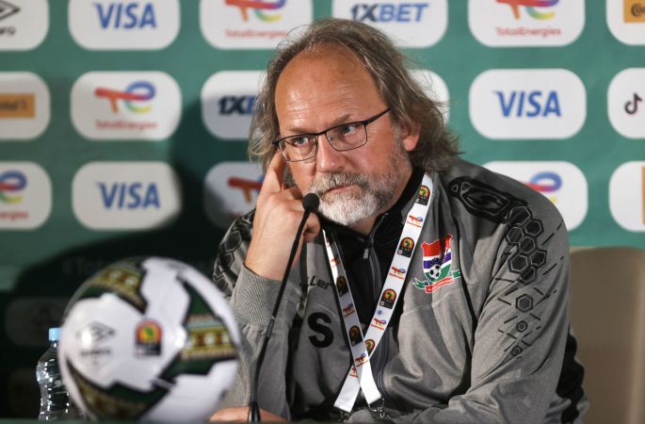 Douala, CAMEROON – Miss Saintfiet is five years old, but already knows more about international football than she’d like. Not because she plays, of course, but because her papa is away a lot, as he has been in the last month with Gambia at the AFCON.

“She cries when my wife tells her that we have won and qualified [to the next stage]. She doesn’t cry from happiness but she is sad [because] she wants papa to come home. But I told her she has to wait a little bit longer.”

Tom is papa not only to his daughter in Belgium, but also to 2.5 million people on the smallest mainland nation in Africa. Seated in the bar area at the team hotel, the 48-year-old is briefly wrongfooted when The Analyst starts what is supposed to be a football interview with family matters.

With a wistful look and a placid smile, he lets us in. “Before the [round of 16] match against Guinea, in school, they made a song [that goes like] hop hop hop, with Gambia to the top! and all the kids were singing. They sent it to me by WhatsApp message from the teacher and that was amazing.”

And while Miss Saintfiet impatiently waits for papa to return, the Scorpions he leads here also do not want that trip to start too soon.

The list of national teams Saintfiet has coached reads like a who’s who of minnows in international football, and he’s aware of a certain reputation that list gives him. Now, with his current team – the Gambia – on the cusp of its biggest match ever, he simply does not care.

“People say I am a globetrotter and that’s not correct,” he puffs. “I’m not a coach who just travels looking for jobs. I travel around the world to be a coach. But, whatever, people can think what they want!”

The guffaw that ends this observation is, at once, relief as it is fact. His last four jobs before this one have not ended encouragingly. In ascending order: fired after six months with Malta, resigned after 35 days at Trinidad and Tobago, fired after three months with Bangladesh, and sacked after eleven months with Togo.

The right word, then, will be peripatetic.

“What word is that?” with that signature tousling of hair. When he’s told, he nods, sagely, “I’ll keep it in my mental English dictionary!”

It’s finally come together for Tom

At this AFCON, it’s become clear that the former-player-whose-career-ended-quickly-via-injury has finally found a team that responds to his methods; responds enough to truly punch above its weight.

But it has not come easy. “In the past I got some good results from limited teams, like with Ethiopia [they drew against a star-studded Nigeria in 2011] and Yemen [lost 2-0 to Saudi Arabia]. They all helped me develop and I am thankful, but there is no doubt that things have come together with Gambia and I’m really proud of what we are doing. This is definitely my best experience as a coach”

“Gambia is not the richest of federations, so I’ve had to travel around Europe, at my own expense, to convince of lot of these players with dual nationalities to come through for their motherland.”

This style of dipping into diaspora is a belief he cemented while at Malta, where some of his indigenous key players included a property agent, a café owner, and “a few who worked in telecoms.”

These travels to harvest Gambian talent yielded, among others, Swiss-born Saidy Janko and Liverpool-born Ibou Touray. In addition to these are the team’s stars: Bologna’s Musa Barrow, Sampdoria’s Omar Colley, AS Roma’s Ebrima Darboe and Muhammed Badamosi of Kortrijk.

Six key players in this squad play in Italy, and their orientation is something the coach has built on to shape this team. Deputy captain Omar Colley admits possession is not priority.

“For years and years Gambian football was about tiki taka and playing pretty. Everybody liked it, but we kept losing games! Mr. Saintfiet now wants us to be efficient, so that’s what we do.”

And it’s shown at this AFCON.

Against Mauritania, Gambia had 39% possession and won 1-0. Against Mali, they had 32% and drew 1-1. Then they beat Tunisia 1-0 with 30% of the ball, even though the Carthage Eagles had a man sent off. In their tempestuous round of 16 game with Guinea, the Gambians had 48% possession and, as usual, prioritised moving the ball quickly up the field rather than keeping it. The result? Another 1-0 win.

“Well, we are here to win games and try to make history for the people back home, not to play any particular brand somebody likes,” Saintfiet says with a glint in the eye.

That glint can be further explained by the miserly football they’ve played at this tournament.

The stats bear the coach and his vice captain out. Gambia don’t bother with pretty play, as evidenced from the few buildups they employ – just 2 throughout the whole tournament, which is joint-second lowest among the remaining teams.

In their four games, Gambia have had fewer shots (8, 12, 10 and 6) than the opposition, but they work on maximising set-pieces.

“As I said, we don’t have the most flamboyant players, so we do what we can to get the best out of match situations,” Saintfiet says. The men to watch for those are Musa Barrow and Ablie Jallow, who have been responsible for the three occasions the team has hit the woodwork: twice against Mali and once against Tunisia.

Beyond the psychological edge Cameroon will have playing at home, the practicalities of Gambia beating the hosts are glaring. Before any tactics, the coach and his players are working on team psyche.

“We’ve made motivational videos about Denmark winning the Euros in 1992, about Greece doing the same in 2004 and about Zambia winning the AFCON [in 2012] – so everyone is ready for whatever happens.”

What’s likely to happen is that the Lions will overload Gambia in almost every area of the field, particularly in defense. With Tony Conceicao – a man who pays attention to detail – at the helm, the hosts will know that Gambia’s center-back pairing (Colley and James Gomez) could be getting tired by now, having played every minute of the Scorpions’ campaign to date.

With Gambia not too keen on pressing high up the field (their PPDA of 19.3 is by far the lowest of any team in the entire tournament), Cameroon will have no problems playing three- or four at the back, with Nicolas Ngamaleu given freedom to use the flanks. Ngamaleu is a vital part of the hosts’ attacks, with the joint-highest number (6) of his team’s chances from open play.

How Gambia could look to stifle their more illustrious opposition is to block access to half spaces. Cameroon’s best exponent of this during this tournament has been Eric Maxim Choupo-Moting. The obvious threat has been Vincent Aboubakar, but carrying the scoring burden (he has six now) as well as creating chances (5), suggests Gambia should map out a plan for the captain alone.

Cameroon are clearly comfortable with intricate passing moves, as evidenced from their having the highest number (51) of 10+ pass sequences at this tournament. What this means is that should Gambia be as stubborn to break down as expect, Cameroon will have the patience to wear them down.

By every metric, the hosts are likely to end the Scorpions’ sting – and it is an eventuality Saintfiet is ready for.

“Let’s be realistic, it will be tough to get to the semi-final. If we don’t make it that far, we know we have given it everything. But I am an optimist and I tell the boys to keep believing and who knows?”

Who knows? is probably the question Miss Saintfiet is asking back home, too. Who knows when Papa will come home?

Soon is the answer – but how soon?