Salah, Mane and Aubameyang on three-man shortlist for CAF Award 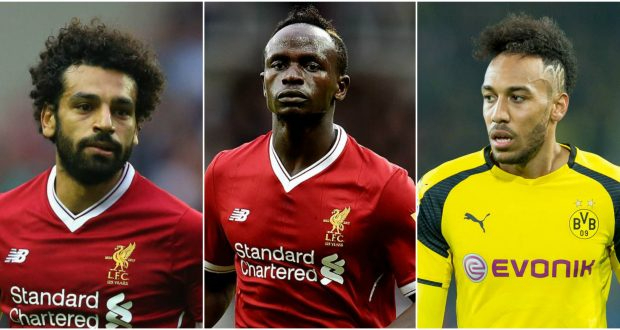 CAF has announced that Mohamed Salah, Aubameyang and Sadio Mane are the final three to compete for the 2017 African Player of the Year Award, after having announced a 30-man shortlist earlier in the year.

Mohamed Salah, 25, scored five goals to help Egypt qualify for their first World Cup since 1990. That was after his two goals helped the Pharaohs to the final of the 2017 Africa Cup of Nations, where they lost 2-1 to Cameroon. He is currently the top scorer in the English Premier League with 14 goals and has netted six times in the Champions League.

Sadio Mane may have failed to lead Senegal to African title in January but he was an instrumental figure in the Teranga Lions’ qualification to the World Cup for the first time in 16 years. At club level, Mane has netted 18 goals for Liverpool this year.

Aubameyang, meanwhile, has scored 45 goals this year and is now the African with the most goals in the history of the Bundesliga.

The list was trimmed down following votes by Head Coaches/Technical Directors of the National Associations affiliated to CAF, members of the CAF Technical and Development Committee and a panel of Media Experts.

The shortlists for the topmost award, African Player of the Year, was unveiled by Ex-Ghana defender, Sammy Kuffour.

The overall winner will be announced at the Awards Gala on Thursday, 4 January 2018 in Accra, Ghana.

Nigerian energy giants, Aiteo, are the headline sponsors of next year’s edition that will see players, officials and administrators who distinguished themselves exemplary during the year under review being honoured for their efforts towards the development of the game on the continent.

African Player of the Year:

Women’s Player of the Year:

Youth Player of the Year:

Coach of the Year:

Club of the Year:

National Team of the Year:

Women’s National Team of the Year: