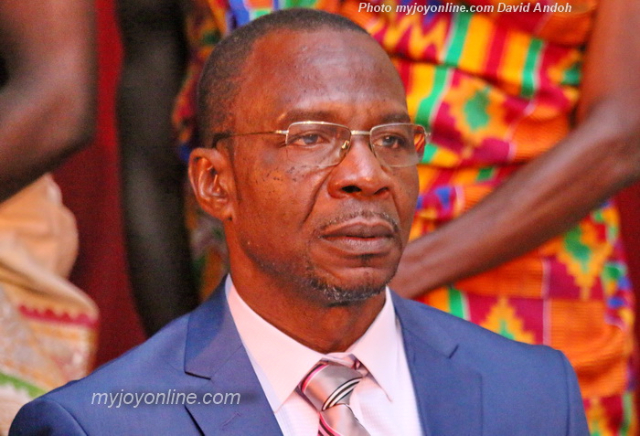 Private legal practitioner Samson Lardy Anyenini has joined a crusade to kick out the GJA President Affail Monney and his batch of executives.

For Samson Lardy the GJA an "otherwise powerful voice has long been irrelevant and offers little attraction."

There is a buzz on social media to get the editor with the state broadcaster, GBC, out.  The social media campaign has been credited to TV3 presenter Kwakye Afreh-Nuamah.

The lawyer rejected the view that the GJA is a monopoly of journalists within the state-owned media houses.

He said this view suggests journalist within state-owned media networks are incapable of making rational judgements.

He said this view "unfairly" reduces journalists in there to "robotic dummies".

Samson Lardy urged those who hold this "undemocratic monopolistic" claim could be advertently or inadvertently pushing for a formation of a splinter group.

The GJA goes to the polls September 29 with Affail Money whose term expired in March seeking a re-election.

Pray – I am joining Kwakye Afreh-Nuamah to pay up GJA dues today. A single protest vote is as worthy as very certain future arrangements that curtail current "monopoly" of the gild. I shall never be interested, as I have said about politics, in the leadership. But we owe it to the survival and relevance of the gild, and ultimate welfare of journalists to demand a lot more plus such rearrangement.

I have been told only strong guys within state media will always win esp the slot of GJA Prez. I don't believe this because it unfairly questions the judgement of colleagues in the state-owned or state-supported media. That guys within such media are seeking change is evidence they are not a bunch of robotic dummies.

But it could be one of the reasons not a quarter of journalists in the country are signed up. It should also be part of the reasons all journalists should be interested in signing up. I will advise those within the GJA proudly making this undemocratic monopolistic claim in reaction to the groundswell of demands for change in leadership to stop.

The GJA is not State Media Journalists Association. I doubt it ever occurs to those making such reaction, including the most unfortunate and uninformed illegal claim that the eligible voters' list for the 2017 elections is closed, that a formidable splinter or competing alternative like a Private Ghana Media Journalists Association PGMJA is possible if a semblance of fair participation is unavailable. Watch NAGRAT!

Pray – If you seek information on acts of abuse and violations of the rights of journalists, you will find a long chronicle of that plus statements issued consistently on those acts by the MFWA and not the GJA. I know because MFWA was a resource when I did those cases of abuse against Vim Afia Pokuaa & co and Joojo Cobbinah & co. #PayUpShowUpVoteOutRescueMission

Pray – I doubt if a quarter of journalists in the country are signed up to GJA, and the reason should be simply that an otherwise powerful voice has long been irrelevant and offers little attraction. Don't be surprised if the gild dies completely.

There are some 400plus members in good standing right? Isn't this number about the same as the number of authorized radio stations in Ghana – 400plus? Only radio! Guess these leaders have asked why and been rescuing the gild.