Sergio Aguero may return to action against Stoke 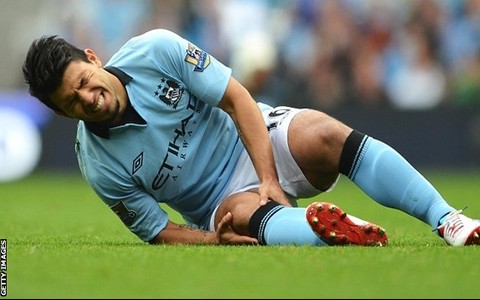 Sergio Aguero will resume training with Manchester City’s first-team squad on Friday and could be involved against Stoke City the following day.
The 24-year-old Argentina striker has been out since injuring his knee in City’s opening game of the season.

“We will try this morning with Sergio,” Mancini said. “And after we try we will decide. He is getting better.”
When asked if he could be involved at the Britannia Stadium on Saturday, the Italian added: “Maybe.”
Continue reading the main story
“
Today is the first training that we have together after the international break. I am sure some of the players are tired. But we do not have time to recover
”
Roberto Mancini
Fellow forward Mario Balotelli has been cleared to play against Stoke if needed after undergoing laser eye surgery during the international break.
The Italian had had difficulty wearing his contact lenses after being affected by conjunctivitis.

Mancini said: “Mario is OK. Mario now sees everything.”
England midfielder Gareth Barry is close to returning after overcoming the abdominal problem that kept him out of Euro 2012 but defender Micah Richards remains sidelined with an ankle injury.

“Gareth hasn’t played any games for almost four months and he needs to build his fitness up,” said Mancini. “But he is training again and I don’t see him being out for any longer than one month and, hopefully, maybe just a couple of weeks.

“Micah’s injury is more serious and he could be out a little longer, but having said that, with rest and the right treatment, we are hopeful he could be ready in about one month.”

Mancini reported no new injury problems with players returning to the club from international duty, including three of the club’s transfer deadline day signings – defender’s Maicon and Matija Nastasic and midfielder Javi Garcia.

Those three, along with winger Scott Sinclair are in competition to make their debut for the club on Saturday.
“We don’t have any players with injuries they are all OK,” said Mancini. “Garcia is OK, Maicon the same. Nastasic was here yesterday for the first
session but they are OK.

“Today is the first training that we have together after the international break. I want to wait until after this training session and then decide because we have a lot of players who have arrived from the other side of the world.

“I am sure some of the players are tired. But we do not have time to recover.”
Last month, Mancini was angered by Argentina’s decision to call up Aguero to their squad for the World Cup qualifiers against Paraguay and Peru despite his injury, calling the move “ridiculous”.

Aguero, who was carried off on a stretcher following a challenge with Nathaniel Clyne in the 3-2 win over Southampton on 19 August, did not feature in either the 3-1 home win over Paraguay on 7 September or the 1-1 draw in Peru four days later.

The Argentine has become a key player for City, scoring 23 league goals in his debut season following last summer’s £38m move from Atletico Madrid, including the goal that gave them a 3-2 victory over QPR on the final day to secure the title.