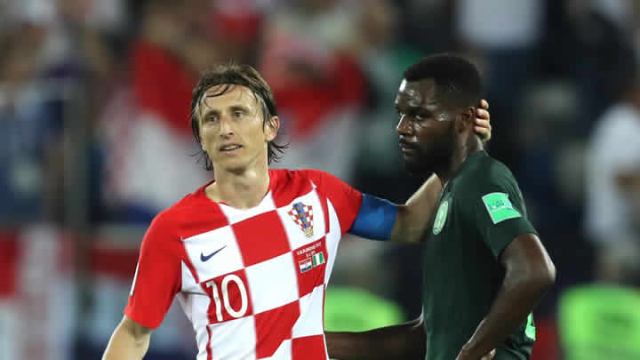 Nigeria followed the way of the African story of defeat at the 2018 World Cup in Russia as they succumbed to a Croatian team that simply knew what to do with the ball.

The Croats ping-pong passing to find players at the pin-point was complemented with long shots and long crosses aimed at Juventus star  Ivan Mandzukic.

The ultimate touch of death however lay in Real Madrid star Luka Modric feet. His cornerkick crosses caused a crisis of clumsiness in the box and led to all two goals.

First it found an unmarked Ivan Mandzukic whose low header knocked off midfielder Oghenekaro Etebo at the near post to break the deadlock in the 32nd minute inside the Kaliningrad Stadium in Kaliningrad, Russia. 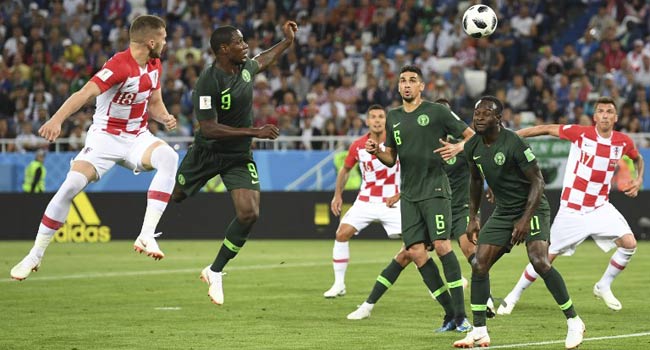 Photo: Ivan Mandzukic was clear of any defender when Luka Modric lifted a cross into the box

And when Nigerians could not contain Modric they tried to contain Mandzukic in another deadly corner and fatal defending bringing down the Juve star for a penalty in the 71minute.

Nigeria had left Mandzukic unmarked in the first half but in this second half cross, they overmarked him as William Troost-Ekong clamped him all over with his arms to bring him down right before the horrified eyes of the referee.

At the blast of the referee's whistle, Modric nestled his shot to dampen an enthusiatic Super Eagles side seen as Africa' best foot forward in Russia. 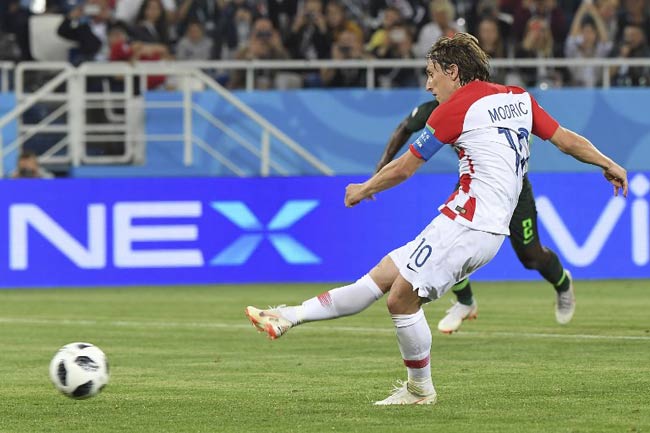 Early on, a patient-passing Nigeria cancelled out Croatia's pressing game but how to find China-based striker Odion Iglaho in the final third laid waste their passing game.

Croats defence cast a labyrinth around the isolated forward who could not find his way into dangerous areas or receive support from three attackers behind him in a 4-2-3-1 tactic.

Captain Mikel Obi was a symbol of Nigeria's lack of imagination and vision that comes easily to Eagles.

His 11minute cross was a gift for the keeper and players struggled to put in visionary passes or crosses inside the box.

Chelsea winger Victor Moses appeared eager to dive than to drive at the defence enough to cause panic and when he finally drove through a defence in the 65minute, a dive overtook his drive as his weak appeals for a penalty was ignored.

His counterpart  Arsenal 's Alex Iwobi's few chances with the ball deep inside Croatia's half was squandered with over-elaborate dancing.

Leicester City Ahmed Musa replaced him in halfway into the second half, Mikel Obi was off for tall and lanky Nkwankwo and the isolated striker was replaced by another Leciester City striker Iheanacho.

The three replacements created two chances deep into the second half Iheanacho cut back a cross to find Musa who was late to the ball and crushed into defender.

Perhaps the hardest work for the Croatian goalkeeper came in the 81 minute as Balogun header with his back to the goal left a slow dropping ball beneath the cross bar snatched by the long stretching effort.

Marcelo Brozovic came in to replace Andrej Kramaric, he slotted next to Rakitic to move his partner Modric further up the midfield roaming behind Mandzukic in the attacking midfield center.

Freed from defensive duties Modric began to truly stamp his authority in the game. His first touch pass found an onrushing Perisic on the left but the cross rammed into Uzoho's green Nigerian shirt.

Nigeria would be concerned about their inability to close down crosses and allowed Modric to have fun with the ball.

Barcelona star Rakitic was not closed down enough so he waltzed through from the left on the 35min to find Perisic whose header could not test the keeper.

It was an attacking rountine that was repeated twice with different actors, this time a a cross to Mandzukic teed up for a shot for Kramaric as the agony showed his shot has not gone in.

A pointless Morrocan header secured an own-goal for Iranian win and Nigerian own-goal plus a penalty will tell every African opponent to dedicate lots of practice for set-pieces for it is set the break their defences into pieces.