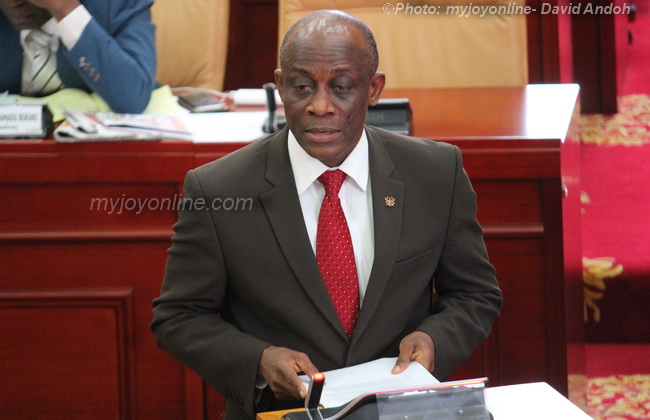 It is the first budget in the second-year of a 3-year IMF program that recommends austerity in public expenditure.

The theme for the 2015 budget read in November 2014 was “Transformational Agenda: Securing the Bright Medium Term Prospects of the Economy

Parliament is predictably full and the MPs are ready to characterize the budget in favourable or unfavourable terms depending on which side an MP belongs.

This is the second time Seth Terpker has had to read a budget this year.

Government in July, came to Parliament to revise its 2015 budget after huge shortfalls in estimated revenue forced government to water down its 2015 expectations and predictions.

The overall budget deficit target shot up from 6.5 percent of GDP to 7.3 percent and inflation was reviewed upward; from 11.5 percent to 13.7 percent.

Seth Terpker then asked for parliamentary approval for more than 800 million cedis to enable it execute projects outlined in the 2015 budget. Myjoyonline.com will provide live update of the figures,  revenues, debts, interpretations and of course the boos and chants in Parliament.

Seth Terpker says he is submitting the 2016 budget and a report on expenditure of petroleum revenue under Section 48 of the Petroleum Revenue Management Act. The 2015 budget is themed “Consolidating progress towards a brighter medium term”.

He says the economy has suffered major shocks for the past three years. The shocks include disruptions in gas supply for 2 and half years and simultaneous falls in gold and cocoa prices.

"Let there be no doubt the economy benefits substantially from our peaceful political climate".

"We will resist the temptation of election-year overspending."

He recalled a key meeting on public wages held between government and the Trades Union that resolved some issues with the Single Spine Pay Policy.

Running mate for the presdiential candidate of the New Patriotic Party, Dr Mahamudu Bawumia is also in the House

He says under government's home-grown policy and IMF programs have brought good gains at consolidating the economy. GDP will grow at 41 compared to 3.5% initially projected. World Bank is projecting growth at 7%.

He says the withdrawal of subsidies is helping to consolidate gains. Budget deficit is down to 2.5% GDP, a reduction that is remarkable.

He says commercial and quasi-commercial projects implemented through loans will now pay for itself, he says. Government has also issued a 15-year bond, the first in sub-Saharan Africa.

Ghana also was assessed for the second time by the IMF in August. The report was confidence-building.

A section of the MPs

He says the declaration of HIPC status generated huge debate in 2001 but it has helped government and now Ghana is part of the Africa rising.

He says the achievements are not only macroeconomic. There are far-reaching gains in education where government has begun the construction of 123 Day SHS.

On health, massive infrastructure and re-tooling is ongoing in places like Ridge Hospital and another at Legon. It will add about 6,000 hospital beds.

Gang of Six roads which were started without any secure finance have also now received support. Suhum-Apedwa road, Kasoa interchange.

He mentions expansion in Takoradi and Tema harbours, aerodrome in Ho and an airport in Tamale which are all self-financing projects without sovereign guarantee.

Fibre optic cables are being laid from Ho to Bawku and from Yendi to Tamale. He says 845 megawatts generation capacity will be added before the year ends.

Tens of thousands of jobs have been created for the youth and professionals as a result of government’s drive to improve infrastructure, health, transport.

He refers to the supplementary budget which government presented in July as a result in revenue shortfalls caused by declining commodity prices.

Even as he speaks gold stock price is yet to recover and cocoa price is now recovering.

The World Bank has changed repayment periods for facilities, going down from 40 to 35 years

The projected 5.3 % of GDP under IMF programs has brought a tighter expenditures space.

But government is not interested in complaining about its challenges. It will confront them with prudent policies, he says.

He says public debt is increasing at a slower pace as a result of government policy. The MPs on the minority side grumble at this revelation.

The Ghana Export and Import (EXIM bank) bill has been brought to parliament to help boost export and address funding problems for expanding exports.

World Economic Outlook for 2015 was 2.9% for first half  which is lower growth than projected. Growth for Sub- Saharan was 5% in 2014 and decelerate to 3.8% by 2015 because of oil, lower demand from trading partners.

Prices for crude oil fell to $59.8 in June 2015 and further to $42.5 per barrel in September 2015 although it was benchmarked at $99 per barrel projected. This means government lost huge revenues.

Except for the month of July, the Ghana Cedi in 2015 depreciated against the USD, Euro and Pound Sterling by an average of about 14%

He says projected budget deficit was GHC 9.7bn or 7.3 GDP. Total expenditure including payment of arrears was GHC 29.7bn against a target of GHC25bn

The lessons government has learnt from the challenges experienced this year are the need for budget discipline, the continued support for the stabilization fund and implemeting a prudent debt management strategy and protecting social intervention programs.

Seth Terpker is projecting a GDP growth including oil at 5.5%, non-oil GDP is projected  5.2% of GDP. Inflations is projected at 10.1%

Government is projecting total tax revenue of GHC 29.9 billion or 18.9% of GDP.

Statutory fees and MDA charges on public services will bring in GHC 6.9billion or 4.9% GDP or 18.5% of total revenue.

Expenditure on goods and services is projected at 1.6 of GDP. Interest payment on loans is estimated at 10.5bn or 6.6 of GDP or 22% of expenditure

Overall budget estimated deficit is pegged at GHC 8.4bn or 5.3% GDP. The deficit will be financed from domestic and foreign sources.

The Minister says the Upper West Region hospital is 68 per cent complete and will be done in 2016. The expansion projects at Korle Bu are on course.  He adds the Tarkwa District Hospital is also being expanded.

NHIS has extended capitation provider payment to Upper East and West Region and will be expanded to other parts of the country.

A picture of a CHPS compound clinic shown in a the Minister's presentation in Parliament has sent MPs chanting.  The minister explains the Community Health Compound is what the communities need. They do not need a hospital the size of Ridge or Korle Bu.

The minister says funding  has been secured for Free SHS programme which will see some 320,488 day students attend school free of charge in 2016.

He says the country is on course to provide 200 Community High Schools. Work has started in 123 schools and President Mahama has started commissioning these schools.

He says Mahama will commission Volta University next week.

He says the major policy initiative to allow failed JHS candidates to rewrite their exams has been highly successful. Some 1,181 candidates have sat for their exams and have been placed into various SHS institutions.

He says Livelihood Empowerment Programme (LEAP) will be expanded to include several aged groups in the society. Electronic means of distribution will be used to give out monies to vulnerable groups.

The first half of 360 megawatts from Sunon Asogli has been completed and will be commissioned by end of the year.

VRA project proving some 49.7 megawatt is being increased by some 38 megawatts

225megawatts Amer and Karpower projects will be completed by end of the year, thus 492.2megawatts will strengthen energy sector greatly boost job creation and businesses.

We appreciate the impatience shown because it affects productivity

But to avoid flaws in implementing energy projects patience is needed.

Some water treatment plants are being constructed to significantly improve access to water.

Some 368 housing project for the security services will be completed on 2017. 5,000 affordable housing unit is on course at Prampram. Phase one of will completed in 2016.

Government has improved the condition of some 4,819km of trunk roads, 5,300km feeder and more than 5000km on urban road projects.

60% completed at expansion and improvement of the Kotoka International Airport Terminal three has been handed over to the contractor.

At the Takoradi Harbour plans are far advanced to build four container terminals, improve access roads and expansion of motorway from 4 to 6 lanes.

114 military officers will be trained outside the country and some 128 more in local institutions.

Government pursued polices in addressing budget imbalances and consolidating our middle-income status. Ghana has been admitted as a member of OCED in October 2015. Ghana will now be invited to OCED seminars and conferences.

Power crisis and low productivity has affected tax collection. GRA has improved revenue collection through the passage of the Income Tax Act and other Acts. A Revenue Administration Bill will be brought to the house.

On plans to implement and join an ECOWAS Common External Tariff (CET), a CET bill will be brought to the House for passage.

MMDAs have been noted to be giving exemptions to organizations without parliamentary approval. Government will drastically impose limits on MMDA’s ability to grant exemptions.

The policy is to put all port operations under the Ghana Revenue Authority. Another objective will be to improve government revenue.

The first phase of the project has been completed. The completion replaces activities of Custom officers in port activities.

The second phase of the project is also underway.

After seven years of the implementation of Single Spine several distortions have been removed. These have impacted positively on fiscal management.