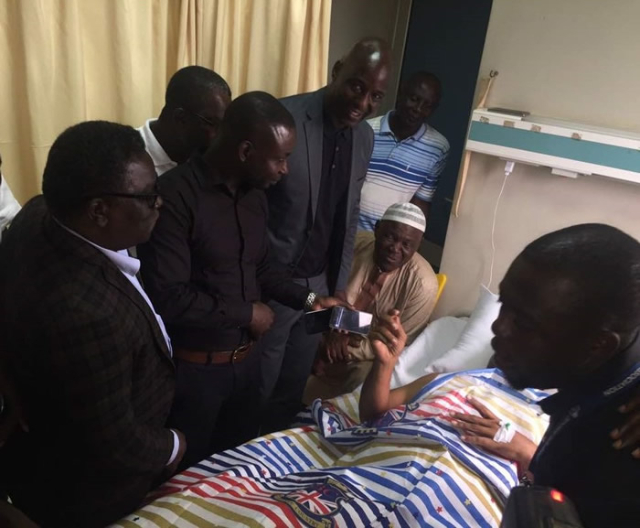 The Management of SIC Insurance and the leadership of the Professional Footballers Association of Ghana (PFAG) have revealed plans to provide insurance cover to all 480 players of Ghana’s Premier League.

This was made known over the weekend when a delegation from both sides visited the coach and some players of the Asante Kotoko team who are still on admission at the Komfo Anokye Teaching Hospital.

The Kotoko team bus crashed into slowing moving truck on their way to Kumasi from Accra after a Premier league game with Inter Allies.

The delegation which was led by the Acting Managing Director of SIC Insurance, Mr. Faris Attrickie and Mr. Tony Baffoe, the General Secretary of the PFAG and other officials of both parties told the media that the visit was to show solidarity with the injured players and to assure them that various insurance packages are in place to support them.

Speaking at the event, the Ag. MD of SIC Insurance emphasized that the PFAG and SIC started working on the project about three years ago and finally launched it last year under PFAG’s “Life after football Fund” in Accra.

The Ag. MD of SIC stressed that the insurance cover provides benefits for both temporal and permanent disabilities, death and other defined situations all in a bid to provide some cushion to the Ghana Premier League players. The premium for the insurance policy has been paid in full by the PFAG.

He lauded the PFAG for their foresight and encouraged other sporting disciplines to learn from their example.

On his part, the General Secretary of the PFAG, Anthony Baffoe, commended SIC Insurance for the role they have played so far and called on all football administrators, players and other stakeholders to continue to support this initiative to breathe life into our local football.