Ethiopian Airlines has offered the relatives of 157 victims of last Sunday's Boeing 737 Max plane crash bags of scorched earth to bury in place of their loved ones, reports say.

Earth from the crash site is being made available for a planned service in Addis Ababa on Sunday, Reuters reports.

Families have been told it could take up to six months to identify remains.

Countries across the world grounded the 737 Max 8 and 9 aircraft after flight 302 crashed on 10 March.

Ethiopia's transport minister said on Saturday it may take "considerable time" for investigators to find the cause of the crash involving the new aeroplane.

"An investigation of such magnitude requires careful analysis and considerable time to come up with something concrete," Dagmawit Moges told a press conference.

Relatives of the passengers killed in the incident are being encouraged to provide DNA samples either in Addis Ababa or at any overseas offices of Ethiopian Airlines.

Death certificates are expected to be issued in two weeks. 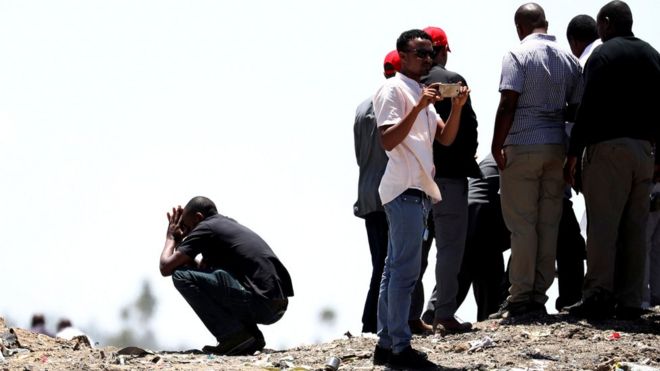 Families mourning the victims are being offered a 1kg (2.2lbs) bag of charred soil to bury as part of Sunday's service in the Ethiopian capital, AP news agency reports.

"The soil came as it became impossible to identify bodies and hand over remains to family members," one family member reportedly said, adding: "We will not rest until we are given the real body or body parts of our loved ones."

Passengers from more than 30 countries were on board the Ethiopian Airlines flight from Addis Ababa to Nairobi.

The Ethiopian investigation into the crash is being assisted by teams from around the world, including the US and France.

The aircraft's flight data recorder (FDR) and cockpit voice recorder (CVR), or black boxes as they are often called, have been recovered and investigators are hoping they will shed light on the tragedy.