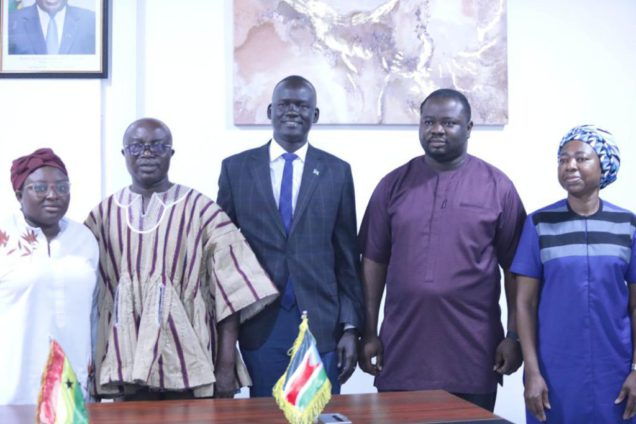 A delegation from South Sudan led by the Minister for Youth and Sports, Peter Baptist Abakar, has called on the Executive Director of National Service Scheme (NSS), Osei Assibey Antwi, at his office in Accra.

According to the Minister, the visit was to understudy Ghana’s National Service Scheme programme to replicate it in their country.

According to Mr Abakar, the delegation was in the country to explore the possibility of signing a Memorandum of Understanding (MOU) with the Management of NSS for knowledge sharing on youth development.

“We have done good feasibility studies, and we have noticed that you have rich experience that we want to copy and paste in South Sudan,” he said.

Mr Abakar noted that the government of South Sudan had begun taking steps to invest in the youth to change their mindset and channel their youthful exuberance energy into productive ventures that would propel them to assist in their country’s development.

He said their country recognizes Ghana as a force that was why they took that decision to visit Ghana to understudy the operations of NSS to inculcate into theirs for accelerated development.

South Sudan, a country rich in natural resources, including gold and diamond, has a total population of over 14 million people, with about 73 per cent of them being youth.

Current records show that about 99 per cent of the youths in South Sudan are jobless.

Also, the country has been badly affected by the war which plagued the nation two years after achieving independence in 2011

The Executive Director of the National Service Scheme (NSS), Osei Assibey Antwi, who received the South Sudan delegation on Friday (October 22, 2021), assured them of his willingness to share Ghana’s experience with them.

Mr Osei-Assibey Antwi, for his part, explained that the secret behind the success story of Ghana’s NSS was the effective management structure, which comprised the board of directors and the executives who oversee the smooth running of the scheme.

He highlighted innovative programmes the management of NSS introduced over the years to equip young graduates with employable skills that would make them fit into the world market and also be relevant stakeholders in national development.

He assured the South Sudanese delegation of the full commitment of the management of NSS to provide their Ministry of Youth and Sports the needed support to develop the competencies of the youth in their country.

The Executive Director commended their ministry for taking cognizance of their youth development and noted, “the youth of today are the future leaders in every country and therefore if it is inculcated in them the sense of the spirit of patriotism and love for their country and backed by the necessary moral tracing and knowledge, their life could definitely be transformed and could contribute meaningfully to their country’s development efforts”.

He added that there was the need for countries in Africa to pay more attention to the youth upbringing and development because, according to him, they constitute the potent resources that could be harnessed to transform the continent.

DISCLAIMER: The Views, Comments, Opinions, Contributions and Statements made by Readers and Contributors on this platform do not necessarily represent the views or policy of Multimedia Group Limited.
Tags:
Minister for Youth and Sports
National Service Scheme
South Sudan