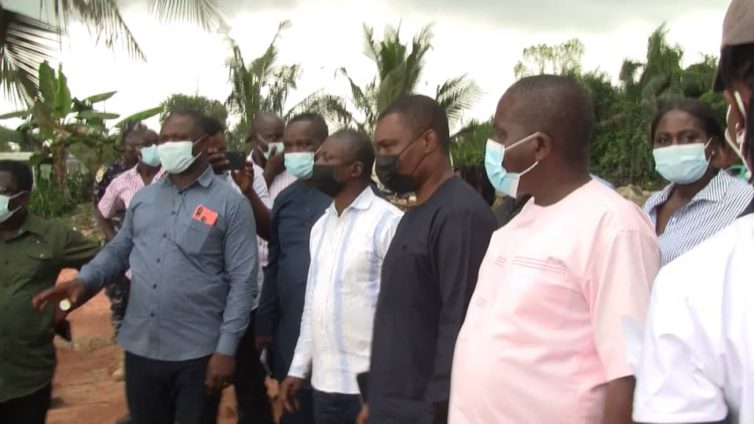 The Deputy Minister of Lands and Natural Resources, in charge of mines, George Mireku Duker, has noted that illegal Ghanaian clay miners are conniving with foreign tile makers to deprive Ghana of benefits from its natural resources.

He described the practice as selfish, which “does not help the country.”

The Deputy Minister said this when he addressed some illegal miners during a day’s tour of some quarry and clay mining sites in the Shama District of the Western Region.

According to him, the United States bagged about $1.4billion in 2015 and $1.9 billion in 2019 respectively from the clay industry. However, same cannot be said about Ghana’s industry.

“We have a million tonnes of clay in Ghana, but, with all those mining clay, we can’t state what they bring, not even corporate social responsibilities, not even replanting.

“We need to chart a new path to stop all illegalities and so decide today. Form associations and we’re ready to help you get the licenses. You are destroying farms and depriving people and communities of their livelihoods. And children are also getting drowned in ponds. You are invading into farms without notice” he said.

He further stated that the illegal miners are selling the clay cheaply because of cheap labor and that is illegal.

“You pay no taxes, I have not come to collapse your jobs, but, we say, mine responsibly. Sand winners are also mining and they have no license. Why? What are we doing to ourselves?” he quizzed.

Meanwhile, at the meeting, he revealed that government records show that all mining operators in Shama had no licenses.

“According to the District Security Committee (DISEC), clay miners, sand winners, and quarries have no licenses, and it’s unfortunate. I am for responsible mining, if you have the concession follow the rules and regulations,” he said.

The Illegal clay miners have thus been given an ultimatum to seize their operations or face sanctions from the government.

DISEC has been directed to clamp down on illegal clay mining and take steps to regularize their operations to ensure sanity as well as save the environment in Shama areas.

The Deputy Minister declared that the Lands and Natural Resource Ministry will collaborate with the Ministry of Trade and Industry to find ways of dealing with the ceramic companies because the clay miners are mining illegally and the companies are condoning and conniving with them.

Mr. George Mireku Duker declined to give details and timelines on the ultimatum, but noted that until there is order in the clay mining industry, the directive to Shama Assembly will hold.

“It’s very, very unfortunate; if you want to mine, follow the protocols and mine according to the dictates of the law. I have given some specific assignments to DISEC which they will soon roll out, but, as for the details, I can’t disclose them,” Mr. Duker said.

One life-threatening issue at the sites, he noted, is the non-reclamation of land after mining and indicated the government’s desire to ensure that it is done according to law.

Mr. Duker urged companies that benefit from the clay to collaborate with the clay mining association to reclaim all degraded sites in Shama.

The Deputy Minister said there will be no amnesty for any miner who is found to have flouted the directive to acquire licenses and go through the right procedures to mine.