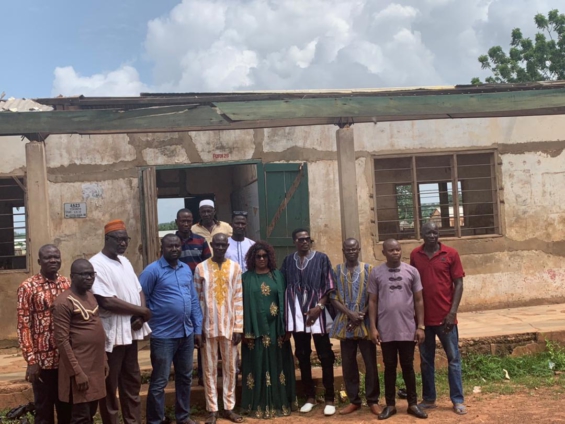 Students of the Nyankpala DA Primary and Junior High School will soon have a roof over their heads because the Regent of the area has donated roofing material for this purpose.

For over a year, the students have had to study under the mercy of the weather after a rainstorm destroyed portions of the school last year.

The VawagriNaa of Nyankpala Abdulai Yakubu Lawson and his wife Amina Sabrina, who presented the items on behalf of the Traditional Council said, the donation was part of his commitment to support key institutions that are impacting on the lives of the people, adding that it is just the beginning of a series of development initiatives he had earmarked for the Nyankpala traditional area.

“I am here on behalf of the Nyankpala Traditional Council, and the good people of the entire Nyankpala, we are confident the items will go a long way to help address some of the infrastructural challenges facing the school and it is my wish that children of Nyankpala will now have access to a more conducive environment to study,” Vawagri Naa Abdulai Yakubu Lawson stated.

The donation forms part of activities to mark his one year in office and also to commemorate the anniversary of his late father, Sahakpal Naa Abdulai Yakubu.

He further appealed to corporate bodies in the area as part of their Corporate Social Responsibility, to support the school to help create an enabling environment for teaching and learning

The Head Teacher of the school, Adam Aziz, expressed gratitude to the Chief and the Queen for their kind gesture, assuring that the items will be used for the intended purpose.

“This is exemplary and we thank you for your noble gesture, and we promise to ensure that the items are used for the intended purpose to benefit the children,” he added.