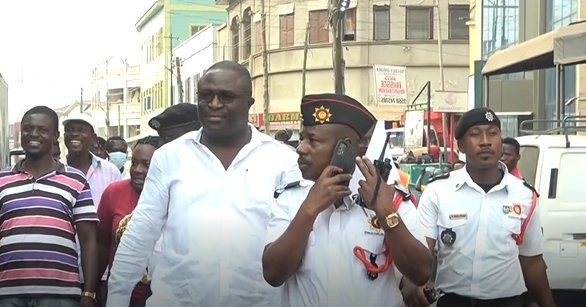 The Subin MP, Eugene Boakye Antwi, has proposed a mandatory reengineering and rewiring of electrical installations on old buildings in the Central Business District of Kumasi.

According to him, many commercialised buildings are about a century old and still have old wiring installations.

Reeingering such installations he said has become imperative due to the rise in fire outbreaks recorded in the locality.

“Over the last fifty years or so, these were our family homes. This is where our parents were born and brought. Now the whole place has become commercialised. They have been turned into offices and shops. So the wiring has to be looked at. The pressure on existing wiring must all be looked at.”

“The EPA, Fire Service have to sit down and look at the buildings that have to be collapsed to be rebuilt with modern wiring taking place. If we don’t do these things, I suspect that these things will be hitting us now and then,” he said.

On Friday, February 4, three shops at Adum were razed down after a fire outbreak. The Agyekum building was among the damaged buildings. Goods amounting to millions of Ghana cedis were destroyed.

The next day, a baby shop inside the Central Business District was engulfed by fire.

The Fire service says it is still conducting investigations to establish the official cause of the fire outbreaks.