Swap our debts for climate interventions – Akufo-Addo to rich countries 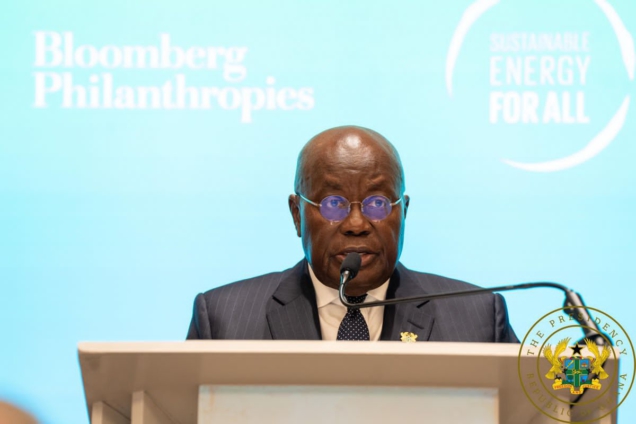 The President has been addressing the world at this year’s United Nations Climate Change Conference, (COP27) in Egypt.

The debt situation is proving to be a major stumbling block to getting an IMF deal in time.

Ghana is seeking a $3 billion bailout but the IMF has made it clear it will not lend to a country with unsustainable debt levels.

The IMF team has already worked with the finance ministry to complete a debt sustainability analysis.

The IMF executive board is expected to base its final decision on the report which may include debt restructuring.

President Akufo-Addo took advantage of the COP27 stage to raise the issue with the rich world.

“I urge those who hold African debt to commit to debt for climate swap initiatives,” the President said.

The President did not hold back in dismissing the global financial architecture as not fit for purpose.

He said a “Radical restructuring of the global financial architecture as proposed by the African finance ministers to accommodate the demands of the developing world is of urgent necessity.

“It is evident that with these poly crises that it is not fit for purpose.”

The President once again took on the rich world for failing to honour a pledge to release $100 billion to help developing countries deal with the impact of climate change.

He also announced that his government will soon be launching a number of climate interventions to create jobs for Ghanaians.

This he says will happen through the rollout of initiatives that will promote regenerative agriculture that requires fewer fertilizers and reforestation with strong biodiversity content.

DISCLAIMER: The Views, Comments, Opinions, Contributions and Statements made by Readers and Contributors on this platform do not necessarily represent the views or policy of Multimedia Group Limited.
Tags:
Akufo-Addo
Climate change
COP27
Egypt