Takoradi Police Dance into the mall! 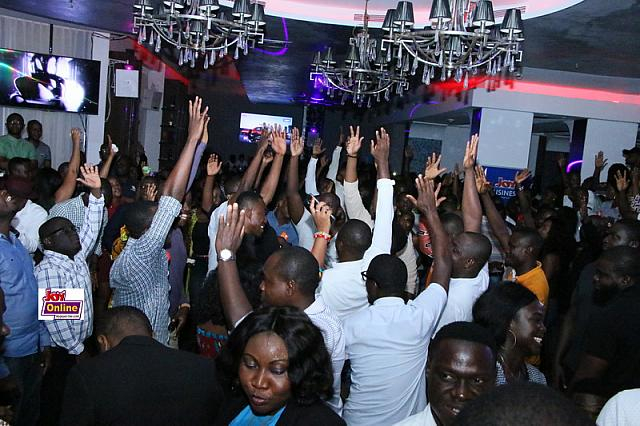 In this busy world, how is it possible to wake up at 4am or earlier and exercise before going to work? Wake up at 4am, exercise, bath with cold water in this cold weather before driving off or ‘trotro-ing’ to work? Life has become work, work, and work! What’s that? We are in so much hurry especially in the Cities such that some of us don’t even bath well.

You get to work by 7.30am, you are in a hurry to eat your waakye breakfast. After that you enter your office and the phone starts ringing from customers and bosses and subordinates, families and some ‘unnecessary’ friends asking for one thing or the other! You have developed a big stomach as a result and think that makes you credit-worthy to take a loan from the bank using your pot belly as collateral. The pressure is great and can kill if not managed well o.

At work, the next thing is a long meeting with the undigested waakye still in your stomach sitting quietly in an air-conditioned boardroom with bashing from your superiors followed by long hours of sitting and then work, work and work and then you close at 5.30pm after having eaten fufu and goat meat with fish as lunch giving you the feeling you are the best man in town!

Then in the evening, you sit in your car and drive at snail’s pace in heavy traffic to get home with your children harassing your life at home. After that you eat your plenty slices of yam and palaver sauce as supper. If you are determined, after eating your food, your husband ‘eats’ you provided you are not too tired. The next thing is to set the alarm against 4am. Why won’t you die of unnecessary stress-related ailments!

Dr Samuel Amoah advised me to be careful with lumping all of these lifestyles into one stomach and head and that the first most important symptom of heart attack is DEATH! We are unable to exercise, we are eating at the wrong times, drinking while’s wassaping, not with friends but eyi! Saturdays come with their own wahala. You wear a black dress for a funeral; waiting inside your car is a white dress for a wedding after the funeral. My friend, it is time to come dance all the stress off ; the Polis protection guaranteed!

Mr George Addison, MD of Old Mutual Insurance, Sir please o, what are the plans for your birthday bash today, Sir? May you grow till you become like a Japanese grandfather who is very strong even at age 130! Hope to see you at the Marina mall tonight to continue with your birthday bash, Sir!

But on a more serious note, to suddenly develop the habit of not eating at night doesn’t come easily o. I was advised not to eat at night but to drink water, and I tried it, I nearly died; I was not used to it. I ate banku at 3pm and they said I shouldn’t eat again till the following day to prevent diseases which have nice names like diabetes, osteoporosis, hypertension, high tension, etc. Eeeeeiiiii! I couldn’t sleep o. In the middle of the night, I started counting the ceiling joints and could tell which of the wooden planks were made from odum and sapele. Hunger at night be what…hai. I was even able to tell the different brands of cement used in moulding the blocks used in building the house. I could tell which of the blocks were moulded with Djankote, which ones with Ghacim and which ones were moulded with Dymond cementi!

Don’t you think this stress-related heart attack deaths have something to do with our tight lifestyles? My friend, don’t kill yourself. Come to the Soho Bar tonight wai. Pamper yourself and come for the corporate jams today Friday July 27 at SOHO Bar inside the Marina Mall. Abeg, remain in your suits and ties, kaba and slit to dance with; even polis and soja uniforms to dance with will give it more fun this way. Watch out for my big stomach and let’s de-stress small. The maiden corporate jams in May this year be small kraaa. I had danced aaaaa and got home and my cholesterol was finished! I made new friends who gave me businesses later, unsurprisingly! The fact that joy of maiden corporate jams is what is pushing me to again ooo. Should I go alone or? Hahaaaa!

Mezop will be there…kpanlogo will be there…borborbor… will be there…asorkpor and agbadza will represent live! dance…dzo dzo waaaa! Ei, where is azonto? With Lexis Bill representing, one can be sure all the exercises that you failed to do in the past 7 months would be done in a few hours with swag and joy!

My Polisman friend in Takoradi will be around to protect all, no shaky. He is a very professional. He was very excited when I mentioned the jams to him and he says he would come and boogie some, mehn!

I drove to Apowa pronounced (‘Apa-wine’) to go and look for a girl for ‘prayers’ and had the shock of my life when a Polis man stopped me to ask of my roadworthy certificate and insurance. I thought they said they should stop that thing. Massa, I did not realize my road worthy certificate and insurance had both expired one and a half months earlier o. He asked me to park which I did. I then put my hand into my pocket to remove the ‘this thing’ so I could be freed to continue with my journey. He ‘wasted’ my time for about 20 minutes educating me on the dangers I stood if my car was involved in an accident and none of those documents was active. First it would be difficult to make an insurance claim and worse of all, if I should accidentally run into another person’s vehicle or even accidentally knock down someone, dead that is when I would know that the blue black uniform they wear has a ‘spiritual’ meaning! That is when a ‘rankless’ constable  would be harassing your life and ordering you about to remove your watch and boxer shorts so you can ‘go inside’.

He even educated me on the dangers of driving a car whose roadworthiness cannot be guaranteed bcos there was no proof of how good it was even though my car was in a good condition. He advised me that in the event that I die while driving, it is my wife and children who would have lost something of value and my mashed ‘useless’ body would have to be cleared by them, Polis people.

After the education, as to be expected, I gave him ‘the this thing’ and he refused to accept it. He looked like someone who would need ‘it’ but he rejected it and educated me on how the law frowns on bribery and that I should never try it again though many of his colleagues were likely to do so. Do what? Don’t ask me anything!

I drove away a highly educated person from this Takoradi Polisman. Massa, there are real professionals in the Polis force o, herh! The man ‘embarrassed’ me la. Upon refusing to take the ‘this thing’ from me, he told me no matter how big my ‘this thing’ was, it could not solve his problems, if anything at all, it had the propensity to aggravate his problems and that I should go and use it to solve my family problems. I respected this man to the eyi! Takoradi Polis, I salute!

If you are excited by this one, you have no idea what happened to me on my way back at Apam junction. That machine was raised at me for over-speeding. It read 64 in a 50 zone. Polisman showed it to me and arrested me. My offence was simple: driving at 64 in a 50 zone’. I challenged him that there was something wrong with his machine. He told me I was ‘too known’ and that the machine was correct paa. I told him I was even driving at 90km/h and not 64 as he and his machine claimed. He counter accused me of having a faulty speedometer! At the end of the day, before being set free I lost some two ‘blue papers’ for the boys o! ‘Roger’! When you see the man’s stomach er, you can be sure he has diabetes in it, kidney problem in it, asthma in his lungs, high blood sugar, high blood pepper, high blood onion, struggling to breathe and …hmmm high blood water if I may say so!. I just wondered with all the ‘eyi’ from motorists, this man doesn’t seem to be at peace with his health. I will bring him to the jams p3333.

The Takoradi Polisman just reminded me of Aban, that elderly Polisman who used to be stationed at Kasoa-Weija old barrier. The man was poor in the pocket but very rich in conscience and integrity. When he arrests you for road traffic offences, he wouldn’t mind spending the whole day with you in the motor court just to get the right thing done; he won’t take a dime even if you offered it. While some of his colleagues were busily arresting and releasing motorists after the ‘roger’ ritual, Aban was busily preparing people for court and would actually be in the court with you till you are fined and discharged and told to ‘go and sin no more’! The fine goes to the State and Aban goes home hungry but e no dey mind so long as he received his monthly pay no matter how small! Ei, where is he now? The last time I saw him was in the early 2000s at Weija junction preparing a trotro driver who jumped the red traffic light for court but I am told he is now stationed somewhere in-between Kintampo and Yapei! Aban nie! I dey feel you rof! He believes his reward for doing his work comes at the end of the month when he is paid his salary – finish! Clean money from one’s sweat!

Please where is the regional office of the Western Regional Polis? Is it inside Takoradi or Sekondi? I don’t even know why I am asking this question o. Maybe bcos I was thinking about how quickly they can attend to a case in Bibiani but I realised there is a Polis district there too so I won’t ask again.

So what were you actually expecting me to say about the Polisi after last week’s plenty polis here, Polis there, Polis everywhere you go? Me? God forbid! Abeg, don’t give me ‘poblem’. Guess what happened to me this morning?

Just as I was leaving the koko joint in my black apparel to the conference centre for the funeral of the late ex Vice-President, Mr P.K Amissah-Arthur, I bumped into a lady with her baby at her back and she screamed agyeeeei, Mewu! And knowing the source of her fears bcos I was in black top, I quickly reassured her: ‘Auntie, I beg, it is not everyone in ‘uniform’ who is like eyi o!’ There, I saw her heave a sigh of relief! Ehern, this thing kraaa is it: ‘heave a sigh of relief or sigh a heave of relief’? Me I don’t know sef again. English no be my language!

Till we meet at the Soho Bar of the Marina Mall tonight, it’s ‘Rogerrrrrrrrr’!