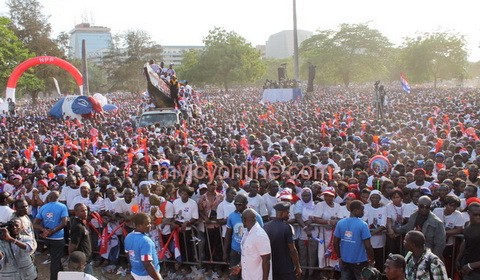 The Electoral Commission (EC) has rubbished claims by the opposition New Patriotic Party (NPP) that it is tipping the scales to favour the governing National Democratic Congress (NDC) in the upcoming by-elections in Talensi.

EC’s Director in the Upper East Region, James Arthur Yeboah, says allegations of vote transfers and the Commission’s alleged refusal to publish names of its election officials are false.

“The district electoral office published the list of election officials and the political parties also made a request for it and they have all been given. [There is] no transfer of votes so nobody has been transferred and there is no transfer going to come on. Because the way the law is you need to transfer votes at least 42 days before the day of the election. But [for this] by-election, the law gives you only 30 days…there is no way [any party] can do transfer”, he said.

The NDC, however, seems to know the cause of NPP’s frustrations and discontent with the EC ahead of the elections.

“The NPP has lost the elections and so they are looking for an exit plan”, explained Kofi Adams, NDC National Organizer.

According to him his party also has no knowledge of the EC’s election officials, save the name of the Returning Officer and the District Electoral Officer.

He said had the NPP been working with the EC as it should party officials would not be crying foul.

At an emergency news conference on Saturday, the NPP alleged that names of EC officials tasked to conduct the poll have not yet been published as required by law.

NPP First Vice Chairman, Freddie Blay, who addressed the news conference also claimed to have uncovered attempts to transfer over three thousand voters outside the constituency on polling day.

The Talensi seat held by the New Patriotic Party (NPP), became vacant when the MP, Robert Mosore resigned after his enskinment as Tongo chief.