Tema-Mpakadan rail line to be completed in March 2022-Afcons 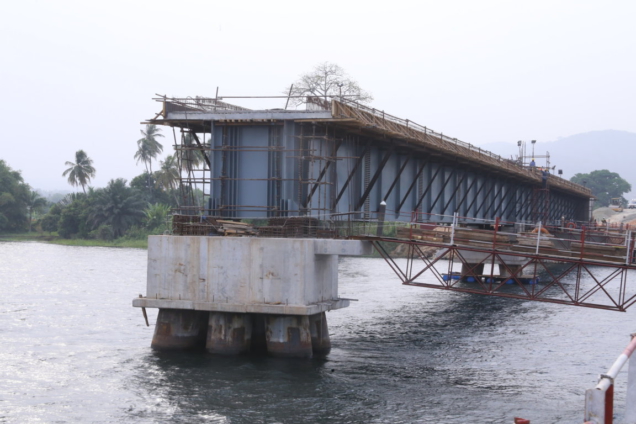 Afcons Infrastructure Limited, the contractor constructing the about 97 km Tema-Mpakadan rail line has promised the project will be substantially completed by end of March this year.

According to its Executive Director of Operations, Akhil Gupta, it will take additional three months after substantial completion to get all finishing touches done.

Speaking to Joy Business after touring some sites of the project as part of his 3-day visit to Ghana, he expressed optimism that the company will meet this deadline.

“I’m very happy to see the progress of work so far. We’ve achieved a progress of 92%. Most of the activities have been completed and we’re very confident the project will be completed substantially by 31st March 2022,” he assured.

Once completed, it will be transport goods from Tema port to Mpakadan to be ferried on the Volta Lake to the northern part of the country.

The project forms part of Ghana’s bigger plan to connect its northern neighbour; Burkina Faso by rail to boost economy of West African the sub-region.

In 2017, the two countries signed a Memorandum of Understanding (MoU) to construct about 1000 kilometres of rail line between them.

At the moment, 68 kilometres of rail lines from the Tema harbour station to Kpong station have been completed with a trial run using a utility vehicle.

Akhil Gupta is happy the project is nearing completion despite all the challenges faced particularly with the construction of a 300 metres steel bridge over the Volta Lake at Senchi, which is downstream Akosombo dam.

“Volta bridge is a landmark bridge particularly because of the typical and challenging geological conditions that we have encountered here,”Mr. Gupta said.

The bridge will be the longest in the country’s infrastructure history with a superstructure made of 60 metre steel girder.

According to him, the bridge can boast of having executed the deepest raker piles anywhere in the world with 1.6 metres in diameter and 76 metres long.

“This was a challenge because of the very difficult soil conditions with 25 metres water depth at the location of the bridge. There was also the issue of siltation of close to 30 metres and needed to penetrate about 25 metres of water depth before going into the rock,” he explained.

For Afcons, the bridge will soon get its recognition in world records.

Due to the uniqueness of the water body, the team needed special equipment and expertise including fabrication of a floating barge with carrying capacity of more than 1000 tons which has helped greatly.

Despite the limited time and challenges, Akhil Gupta said the team including the project manager, engineers, skilled and unskilled workers and the rest have all put in a great effort towards completion of the project.

Meanwhile, some residents of communities along the railway line including okada riders share some benefits of the project.

At Beleykope near Kpong, Adiza Djibril who is a trader said it is quite frustrating to spend hours in traffic especially for those who travel to Accra and Tema to buy goods.

Issah Mohammed believes designated terminals for the train will mean less stops on the way as this will improve turnaround time.

Meanwhile, Okada rider, Richard Okanta and his colleagues are already filling their pockets by carrying passengers to and from the project sites at Senchi.

DISCLAIMER: The Views, Comments, Opinions, Contributions and Statements made by Readers and Contributors on this platform do not necessarily represent the views or policy of Multimedia Group Limited.
Tags:
AFCONS Infrastructure Limited
Tema-Mpakadan rail line