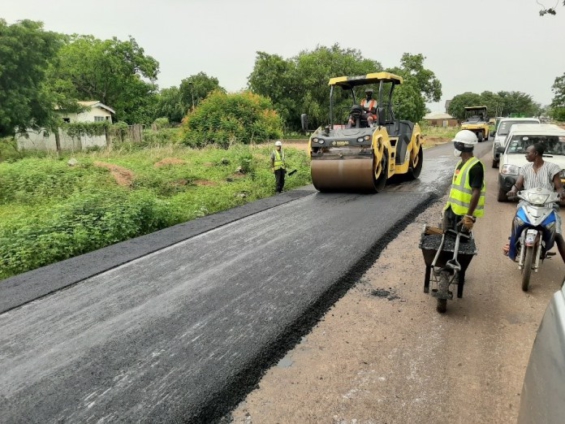 Major roads in the Tema West Municipality in the Greater Accra Region are being rehabilitated with an asphalt overlay.

The 15-kilometer road network facelift is being undertaken by the Ministry of Roads and Highways.

The 30 million Ghana Cedi project, with various components, was expected to be completed in 24 months.

Speaking to the GNA in Sakumono over the weekend during an inspection of the on-going project, Mr. Kelvin Ramsey Lartey, Project Manager, said most of the roads had deteriorated with some broken-down drains.

Contrary to expectation by some residents that works should have commenced on the beach stretch before others because it needs urgent fixing, he said the beach road was a major road which received huge volumes of traffic daily, adding that a Falling Weight Deflectometer (FWD) testing was being conducted before works could commence.

“The testing is expected to evaluate the structural integrity of the roads particularly the pavement to see what could be wrong with it and further ensure that the new layer does not fail like the previous one, ” he explained, saying that whiles testing was being conducted, works on the Estate roads was ongoing.

Mrs Adwoa Amoako, Municipal Chief Executive, Tema West Municipal Assembly, who was joined by a team of engineers from the Assembly, expressed satisfaction with the progress of work and called on the contractors to complete the project on schedule.

On the rehabilitation of the roads, she said the repairs would ease the difficulties commuters face.

DISCLAIMER: The Views, Comments, Opinions, Contributions and Statements made by Readers and Contributors on this platform do not necessarily represent the views or policy of Multimedia Group Limited.
Tags:
Road Construction