The 2 Pilots: A flight doomed to fail? (Spoiler alert!) 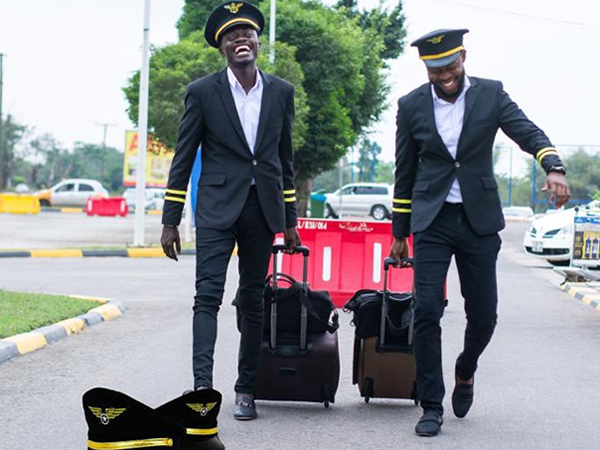 The much-anticipated premiere of the 2 pilots movie came off at the national theatre on April 26.

The second showing did not come off at eight pm as planned. Probably due to delay in the first showing as patrons of the first were not out yet.

However, the delay did not douse the patrons’ excitement to see the movie. The first Kumawood movie to have a premiere.

The front yard of the national theatre kept filling up with people, who could not wait to see their two comic people Richard Asante popularly called Kalybos and Kwadwo Nkansah also known as Lil Win in a movie as pilots.

When the gates were finally opened, patrons rushed in pushing each other in other to get good seats for a better view of whatever ‘The 2 Pilots’ movie had in store for them.

After waiting for patrons to settle, the showing finally started at 9:15 pm.

The movie had patrons laughing right off the bat when Lil Win and Kalybos made reference to the famous line from rapper Medikal “aboa wo to nono” while introducing their girlfriends to each other.

Things took off a surprising turn when people realised the two were not originally pilots, what were they then?

Con men! They were con men.

These two can successfully persuade men to give them money as huge as $40,000 for a service they would not render.

What business do con men have with flying planes?

Patrons were at the edge of their seats when these con men wanted by the police, after a business deal gone bad, stole uniforms of pilots, disguised themselves as one and took a plane headed to Accra from Kumasi to fly.

As intense at that scene was, Lil Win had to come in and tell people on the flight, the plane will crash so they should say their last prayer.

The announcement that got characters confessing their bad deeds but got patrons laughing for so long.

Before patrons left the venue they saw that the pilots did a good job flying the plane.

But the questions were, can they land the plane? For all the wrong they did, will the police get hold of them? Will they pay for their crime?

The major twist was when patrons found out some part of the movie had been an illusion.

Patrons were left with the urge to sit and find out more or get their questions answered, however, the movie came to an end with the not that there would be more to come.

The applause could not stop. People were impressed with the efficiency of the police investigation team, which had actress Emelia Brobbey as commander and Kweku Manu as a police officer, in catching the con men and getting monies of people back to them.

Others could not have enough of the comedy and chemistry between the two lead characters Kalybos and Lil Win.

Akwasi Boadi, popularly known as Akrobeto, was also one character patrons were into.

The downside was the lines at some parts of the movie were not translated which was had on some patrons who did not have a full grasp of Twi.

All in all, patrons left with smiles their faces and the urge for the more.

DISCLAIMER: The Views, Comments, Opinions, Contributions and Statements made by Readers and Contributors on this platform do not necessarily represent the views or policy of Multimedia Group Limited.
Tags:
Kalybos
The 2 Pilots