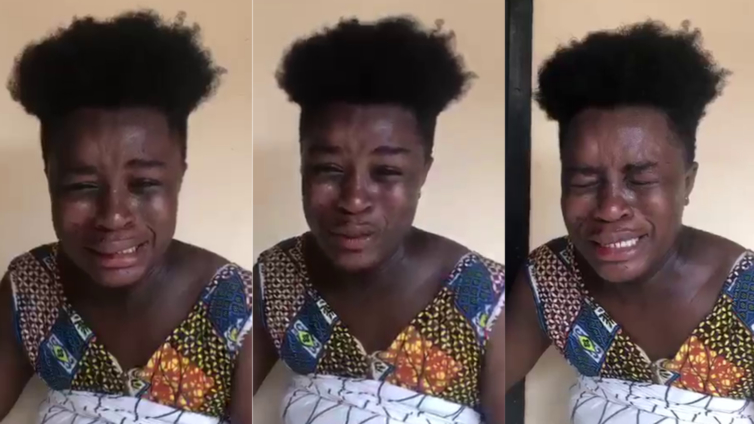 In their marriage photos, Rachel Adu Brown – brown in name, complexion and to her very dress, looks piercingly into the camera, fascinator to the right side of her head. A happy marriage, here we come, she seems to say as Steve, her husband wraps the right arm around her waist as if to say, ‘That’s right’.

But two years later, there is another image of her making rounds on the internet. In a video she posted, Rachel could barely look into the camera with the same assuredness. Barely. Her hair is kinky in a way that said more than just trying to keep it natural. She was finding it hard to keep herself together. She looked aghast.

The UCC graduate and former Wesley Girls High school student explained her husband, Steve, had been abusing her. She said she had been compelled to join a family business of her in-laws which paid too little. She cried for help – and a lawyer. ‘I want justice,’ she said.

Watching the video shown on JoyNews, Dr. Angela Dwamena-Aboagye’s face twitched in an all too familiar countenance of pain, hurt, boiling anger and settled sadness. Even after more than 21 years of crisis care and counselling for domestic violence victims, new stories still draw raw emotions from the Executive Director of the Ark Foundation.

Former Minister, Catherine Afeku would hang her head in the JoyNews studio, after watching the video. “I was emotionally distraught,” she said.

Domestic violence, an abuse defined by Ghana’s law in 226 words, one of the longest definitions in the country’s law books. As for Ghana “when it comes to making laws, nobody beats us”, Dr. Dwamena-Aboagye said. Except that those who beat this law are those doing the beating in homes.

Lawyers who know this law, still beat their spouses and judges who know these laws have sentenced their wives to prisons of emotional abuse.

Dr. Dwamena-Aboagye mentioned a lawyer who would abuse his wife into downright nudity and throw her out of the home, leaving her to lurk around in unimaginable shame, needing neighbours to make her look human again.

She told of a judge who would lock his wife inside her room as punishment.

”He would open the door a little bit, to feed her by putting her food on a plate” and push it across the floor to his inmate called wife.

“It took the striking force [of the police] to get that woman out,” she told an experience without giving out names.

She said she knew of an educated husband who would insist on having sex with his wife until the wounds from her recent C-Section would open to great pains.

And during Covid-19 imposed lockdowns. “It was a nightmare,” the animated lawyer shuddered at the many private stories of abuse, pushing forcefully to be let out of her memory and be told.

Irene Aborchie-Nyahe, who has once asked that the National Cathedral under construction be used to house abused women, said she knew women who have been so abused they have outsourced the daily mental work of basic decision-making to their husbands.

“Everything, you ask your partner to be sure you are doing the right thing” and the women end up believing they “cannot achieve anything in life.”

She said it constitutes abuse to “prevent a human being who happens to be a woman not to follow her dreams or work hard to earn an income” she said explaining the position of the law in the case of Rachel Ado Brown’s story of abuse.

Catherine Afeku, a former Member of Parliament and former Minister for Tourism, Arts and Culture pulled out some statistics from the Domestic Violence and Victims Support Unit (DOVVSU) of the Ghana Police. It showed that from 9,393 reported cases of domestic abuse in 2018, the country would record a sensational increase to 18,629 the following year.

It means in 2019, people reported at least 52 cases of domestic violence each day including someone’s wedding day.

Dr. Angela Dwamena-Aboagye, explaining the crisis of domestic violence even among the educated class, said the major barriers were cultural norms that reinforce ideas that it is a man’s world full of second-rate women. She blamed misinterpreted teachings of the Bible by pastors who over-emphasise a woman’s submission at home and downplay a man’s need to sacrifice to keep his home happy.

“You only hear one side of the story” she described some sermons preached from the pulpit on marriage.

“We are not taught what it means to become like one who sacrifices for his wife to become all that God made her to be.” Other religious teachings also endorse beating a woman but with something no bigger than a thumb, she expressed dismay.

But the lawyer also did not spare the law, tracing embedded bias against women in family law and jurisprudence. She mentioned the influence of William Blackstone, an English judge of the 18th century who in his popular commentaries on the laws of England wrote in 1765 that;

“By marriage, the husband and wife are one person in law: that is, the very being or legal existence of the woman is suspended during the marriage, or at least is incorporated and consolidated into that of the husband; under whose wing, protection, and cover, she performs everything.”

As domestic violence in Ghana continues to reach unsettling heights, the three gender activists who had congregated on JoyNews, said Ghanaians need to be jarred out of a general ambivalence to the many shades of domestic violence.

While Irene Aborchie-Nyahe called for more government support for victims, Dr. Dwamena-Aboagye zoomed in on DOVVSU and asked government to elevate the overwhelmed unit into a directorate within the police service which would give it more powers and resources.

Catherine Afeku said she had joined forces with Ghana’s First Lady, Rebecca Akufo-Addo, who together with the police service are running a campaign against domestic violence. It’s, #saynotodomesticviolence.

House helps, security guards, children, husbands and more pronouncedly, wives are being abused within the four walls of private building called homes. Crimes at home leading to cracks in families but which are papered over by powerful socio-cultural norms and religious beliefs.

Women walk around in wearing white rings and a black eye. But significant parts of Ghanaian society don’t seem to appreciate the crisis.

“We are becoming jaded. And it is not normal” Afeku summed it up.