The love from Ghanaians during the Olympics was overwhelming – Joseph Paul 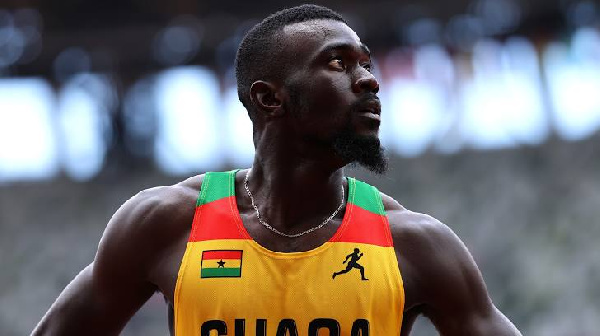 National 200m record holder Joseph Paul Amoah has admitted that the affection from Ghana during the just ended Olympics was simply unbelievable.

Amoah finished third in the men’s 200m heat 7 and crossed the finish line in 20.35s, behind USA’s Noah Lyles and eSwatini’s Masenjwa.

The Coppin State University student is still coming to terms with the huge interest by Ghanaians all through the games.

“I’ll say the love and support Ghanaians showed was, I don’t know what words to use to describe it, but it was unbelievable and as Azamati said, Ghana is known to be a footballing nation and we gave them another sport to watch,” the 24-year-old told Joy Sports.

“As an athlete I don’t think I have ever felt that type of way towards track and field before, so it shows the kind of level Ghana Athletics is going to and we are very happy to be the bring back the love”.

Even though Amoah missed out on a place in the finals of the men’s 200m at the Tokyo Olympics he ran a season’s best time of 20.27s, to place 4th in his semi-finals heat.

He explained that the current crop of athletes are more than committed to making the most of upcoming opportunities.

“We are happy to wake Ghana Athletics up again and setting the foundation even stronger for the guys back home and elsewhere just so they know that they can do it regardless of where they are.

“The support was just amazing. This is something we tried to achieve for Ghana Athletics and we are happy”.

Joseph Paul will be hoping to make next year’s world athletics championships in the USA, the 2023 All Africa games to be staged in Ghana and the 2024 Olympics scheduled for France.