The politics of SADA - MyJoyOnline.com

The politics of SADA 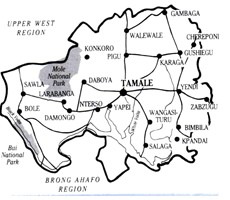 The urgent need to rapidly develop the three northern regions led to major political promises to affirmatively develop the region. Whiles the NPP promised Northern Development Fund (NDF), the then opposition NDC promised Savanna Accelerated Development Authority (SADA) with a seed capital of 200 million cedis. In the end, SADA, proposed by the NDC won the hearts of many northerners.

The three regions of Northern Ghana remain prominently behind in terms of poverty, and the opportunities for improving the situation remain illusive.

The quest to rapidly develop the north did not start today. Indeed the disparity between the northern and southern sector could be traced and blamed on our colonial masters. This is common knowledge and I am sure Ghanaians by now knows this.

Our colonial masters used northerners as the working class without adequate educational institutions. There was a deliberate and conscious effort by the British colonial administrators to create that developmental disparity.

It saw the North as a reservoir for labour, thus education for example was denied the North in the colonial era.

This deliberate starvation of the north of education and development created stark disparities in development between the North and the South. This actually left a large chunk of the northern youth uneducated and with little or no skills.

The Nkrumah-led CPP recognized the backlog and therefore introduced the Northern fee-free education scheme. This was aimed to close the educational bridge between the north and the south. Steps were also taken to close the infrastructural gab with the establishment of the Tomato factory etc.

All governments, since then, have recognized the need for a unique scheme to accelerate Northern development. This was made more poignant when the African Peer Review Mechanism (APRM) picked it as a major development challenge for Ghana.

Sadly, when Finance Minster, Dr Duffour was reading the Supplementary Budget in parliament a year ago, he allocated GH20m to ECOBRIGADE whiles SADA received a poultry sum of GH5m.

SADA is a government project aimed to (a) prepare and regularly up-date a long-term development agenda for the Northern Savannah ecological zone; (b) to coordinate strategic development interventions in the Northern Savannah areas by provide leadership in determining the most viable strategies for accelerating economic growth, reducing poverty and ensuring equitable allocation of resources and the benefits to all social groups in the area; and (c) to work with the Ministry of Finance and other Development Partners to mobilize financial, material and human resources for the accelerated investments needed to transform the SADA areas and reduce poverty there.

ECOBRIGADE is also another government program designed with an objective to help clean our beaches of human waste and filth.

As to how government turns to give much priority to the ECOBRIGADE project over SADA baffles my imaginations. This for me is a slap in the face of northerners.

I am not hereby saying cleaning our beaches of filth and human excreta is of no value to our tourism industry. However, for a government to less prioritize a project on whose success the lives of millions depend, leaves much to be desired about them.

Upon all the disappointment and virtually given up on SADA, I am happy government have released GHC100million into the SADA fund with the second tranche of GHC100million due for payment in the second half of the year.

I sincerely commend government for that.

Nevertheless, I have a challenge with government on the source of funding of SADA. My challenges stems from the recent “NATIONAL GoG/DEVELOPMENT PARTNER’S CONFERENCE SADA” held on Monday November 21st, 2011.

I seriously think we are virtually handing over our responsibilities of alleviating poverty into the hands of the whites. Don’t miss represent me, I am not a racist. However, the interests of these whites have no limit. By so doing, we’re virtually asking the white man, who is the cause of my plight and that of my brothers up north, to determine and control the operation of SADA.

I think these people are hiding under the guise of ‘investors’ to reap us off again.

For me, it is a matter of priority. We don’t need ‘investors’ to ensure SADA works. We have additional resources, i.e. oil. I honestly proposed that a chunk of the revenue we generate from the sale of our oil share be channeled into funding it.

Else, another threat will come from the western world to sign onto “single sex marriage” or no donor support for SADA.

The involvement of ‘investors’ in SADA for me is a threat to its success. I therefore call on government to review it donor funding of SADA and think outside the box to fund this project.

We can’t rest the success of SADA on the shoulders of the west.

How to sustain and improve upon SADA will be an interesting piece to write on.