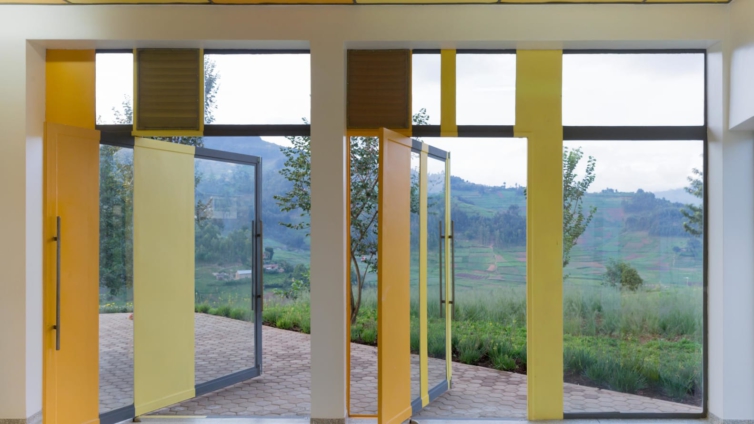 Craving a change, Mokholo attended the influential Design Indaba conference in Cape Town in early 2016 and listened to a pitch for the African Design Centre (ADC), a program seeking to shake up the highly unequal business of African architecture.

“I was immediately sold on what they were trying to do and teach, and I felt they were taking an approach to education and architecture that was not readily accessible anywhere on the continent, maybe anywhere in the world,” said Mokholo.

Last summer, the first cohort of ADC graduates completed its inaugural 20-month fellowship in Kigali, Rwanda, with Mokholo among them.

The ten fellows, hailing from eight African nations, are now upending architecture, design and construction across a continent where rapid urbanization and population growth are presenting severe challenges to governments, with the needs of the poorest left unmet.

Their signature achievement is the Ruhehe Primary School in northern Rwanda, where more than 1,000 children now receive an education in a custom-built space, constructed almost entirely from materials sourced 150 kilometers from the site, and honed by builders, carpenters and masons from the area.

For Mokholo, “good architecture is a human right.” And with Africa’s urban population predicted to soar (a UN report in 2017 predicted that half of world’s population growth is likely to occur in Africa by 2050), it’s also needed urgently.

A severe shortage of qualified architects and designers has left most sub-Saharan African countries lacking the homegrown expertise needed to build cost-effective infrastructure, and mushrooming slums already blight cities such as Nairobi and Johannesburg.

By sourcing building materials locally, tapping into ancient craft techniques that globalization has pushed out of favor, and training a lot more architects, those leading the African Design Centre believe there is a sustainable solution to this looming crisis.

Christian Benimana, the center’s Rwandan director, likes to cite the statistic that Italy alone has 153,000 designers, in comparison to just 35,000 across the whole African continent.

When he was growing up, Rwanda did not have a single architecture school, and although there is now one teaching facility, it is less than a decade old.

As a child, Benimana was obsessed with drawing and design, and with the support of his parents he eventually won a scholarship to study architecture in Shanghai in 2001.

“It was quite a culture shock, and a very humbling experience at first. It shattered all the foundations of ideals I had constructed my entire life, and expanded the definition of possibility in every way,” he reflected.

China was building entire new cities at a breakneck pace in the 2000s, and pulling millions out of poverty with new manufacturing jobs in urban areas.

Benimana wondered what he could bring back to his country, knowing that many would be counting on him.

After completing his studies and returning home to teach, Benimana struggled to pass on his knowledge to students with no framework to understand the principles he was trying to explain. Frustrated, he then joined forces with Boston-based MASS Design Group, a non-profit architecture and design firm, in 2010.

MASS’s second project in Rwanda was to be the country’s only cancer hospital — now known as the Butaro Cancer Centre of Excellence.

Benimana recalls his introduction to the philosophy of a “performative building”. MASS Design is well known for considering how the structure of a hospital can help patients recover faster, or how the design of a school can aid children to learn better. “It was focused less on architecture and more on health benefits and health outcomes,” Benimana explained.

The future of African design

After considering several different iterations of the ADC program, Benimana and MASS settled on targeting graduates and those already equipped with some professional training.

The hope was their impact could travel further and spread in the students’ countries of origin.

The ten fellows arrived in September 2016 with varied expertise and levels of experience. A Rwandan named Victor Iyakaremye had just completed a degree in architecture, while Mokholo had several postgraduate qualifications and years of work under his belt.

“I knew I was going to meet a really exciting group of people from all over Africa,” Iyakaremye recalled. He now works full time at MASS in Rwanda and is a designer on the Rwandan campus of the Dian Fossey Gorilla Fund, shaping a 50,000-square foot facility for the American conservation group protecting the country’s few hundred remaining mountain gorillas.

Iyakaremye learned more than he expected about his own country during the program.

Working with a pottery collective which makes water filters out of clay and women, whose woven baskets are part of Rwanda’s rich heritage of functional design, the 30-year-old was proud to see the skills of his countrymen and women impress fellows from Kenya and South Africa.

“Kigali is like a lab. You go and test ideas. There is a huge opportunity opening in every area, not only in architecture,” he added enthusiastically.

Zani Gichuki, a Kenyan structural engineer and ADC fellow, wants to found her own tech-driven design lab back in Nairobi, where traffic and the population have become “very dense” in recent years.

“I am an educated African woman, and I needed to find a way to give back. I believe that engineering is not just about designing big buildings and making money,” she said. She rewrote her own ethics code after taking part in community consultations regarding Ruhehe Primary School, and she even conducted sessions with the children to get their view on plans for the new building.”

We need to be more sensitive about incorporating marginalized communities and, instead of just designing for the strongest person, design for women, children, and differently-abled people,” she emphasized.

She is studying the use of earth as a building material — an ancient technique in East Africa.

Meanwhile, Mokholo is leading a search for suitable projects across southern Africa for MASS, with hopes of founding his own African Design Centre one day.

“Architecture has become a commercial commodity in South Africa, limited to people who can afford it,” he said. “I’m trying to take what I have learned and share it with as many people as I can.”