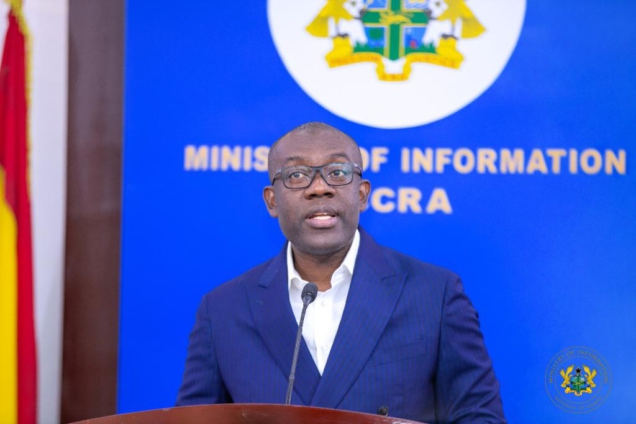 The Minister for Information, Kojo Oppong Nkrumah, says President Akufo-Addo’s address on the state of the economy has been met with mixed reactions from the general public.

He stressed that not all the reactions have been negative as some Ghanaians have expressed satisfaction with the President’s speech and the measures he outlined to tackle the economic crisis.

He, however, noted that it was not surprising that some Ghanaians would have negative reactions to the address; as such behavior is expected at the beginning of every crisis.

Nonetheless, the Information Minister is hopeful that with time, those who reacted aversely towards the President’s speech would come to realize that the government means well and is working assiduously to correct the ailing economy.

“Some were pleased with the fact that he started articulating the broad measures that we should be embarking on as a Republic. The reaction has been missed but this is really not surprising,” he said on JoyNews’ PM Express.

Citing the Covid-19 pandemic, he noted that government’s interventions and measures were initially met with hostility, however, following the regular updates on issues and the amplifying of these interventions through the media most Ghanaians came to appreciate the government’s efforts.

“I remember right from the beginning when we were fighting the last crisis, Covid, and for example when we talk of poll testing and the fact that we had tested X numbers in a day, you had people including some of the people whom you have mentioned specifically by name saying ‘it’s not true, it’s not possible, you can’t test this number, I don’t believe it, it is not credible’ we had all of those ones.

“But I think what was important was that as we kept going and as we kept explaining and showcasing the realities, people started coming along with us. And as you our colleagues in the media gave us an opportunity to reach out more and show to the various stakeholders why what we were saying was true; for example, people started understanding that the numbers we were putting up were not cooked up, people started understanding that the testing that we were talking about was not cooked up and that the interventions that were being rolled up were interventions that were clearly thought through,” he said.

“So for me at the beginning of ‘a crisis’ it’s really not strange when people say ‘I’m disappointed, I’m not pleased, I don’t find this is credible, I don’t believe this’ etc. It’s normal at the beginning of a crisis. The important thing is the consistency with which you go and the honesty and the clarity that you bring to the table, your ability to concede where there are errors and to carry everybody along because at the end of the day, our common objective is to resolve together the challenges that the Ghanaian economy is having. And so views have been mixed, but I think it’s early days,” he added.

DISCLAIMER: The Views, Comments, Opinions, Contributions and Statements made by Readers and Contributors on this platform do not necessarily represent the views or policy of Multimedia Group Limited.
Tags:
Akufo-Addo
Kojo Oppong Nkrumah