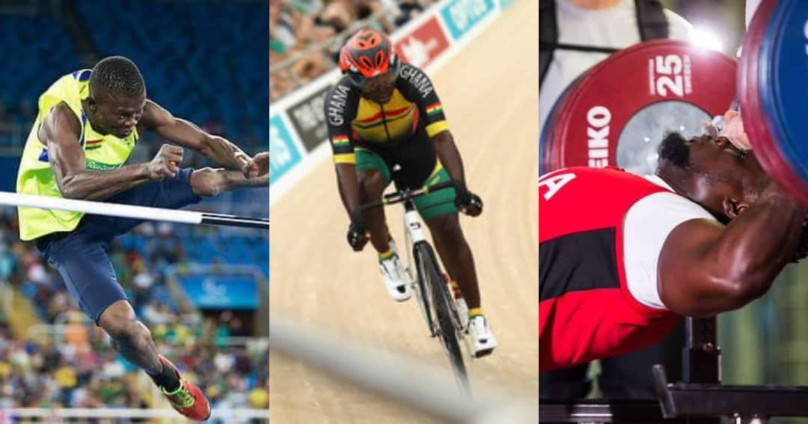 After five years, the much awaited Paralympic Games comes off in Tokyo, Japan.

4,400 athletes from 162 National Paralympic committees will compete in 539 medal events across 22 sports.

This is how #TeamGhana showed up at the #Paralympics opening ceremony.

Emmanuel Nii Tetteh Oku, who is a powerlifter, was the flag bearer.#JoySports pic.twitter.com/gmZkpc49Px

Emmanuel Nii Tetteh Oku will be Ghana’s flag bearer at the opening ceremony of the Paralympic games.

His left leg was amputated after being shot working as a palace guard. As a result, he’s considered as an above knee amputee.

The 30-year-old will compete in the Men’s 72kg Powerlifting event.

He qualified for the Paralympic Games after winning bronze in the men’s 72 kg category at the World Para Powerlifting World Cup in Manchester.

Yusif Amadu was Ghana’s flag bearer at the 2016 Paralympic Games hosted in Rio.

In the Rio Games, he finished 11th and will compete in the t42 high jump this year.

In 2017, Amadu was named the Para Athlete of the Year at the Sports Writers Association of Ghana awards.

Amadu’s leg impairment is a due to the effects of polio.

Fredrick Assor is a para-cyclist who will compete for Team Ghana in the Men’s B 4000m Individual Pursuit and the Men’s B 1000m Time Trial.

He has been active in previous years as he participated in the 2018 Commonwealth Games in Australia and enjoyed a good run at the Tandem Elite Championship.

Assor is blind and competes in the Tandem event which sees athletes use a sighted pilot and a non-sighted rider.

Seven athletes have represented Ghana at the Paralympic Games since the NPC made its debut in 2004.

Wheelchair racing athlete, Raphael Botsyo Nkegbe has made the most Paralympic appearances for Ghana, contesting T54 sprint events at three consecutive editions of the Games between 2004 and 2012.

The reigning SWAG Sports Personality of the Year wasn’t selected by the National Paralympic Committee (NPC) who opted for Amadu.

The International Paralympic Committee wrote to Ghana that no para athlete made the automatic qualification time, however, one athlete could be presented.

The NPC board voted and chose Amadu over Nkegbe, who expressed his disappointment.

“All those who are there are Ghanaians and I wish them the best of luck. For the NPC leadership, they made the choice because they wielded the power as a board, but to be honest it’s not a decision most Ghanaians would agree with because the best of Ghanaian athletes need to represent the country.”

Anita Foudjour has achieved the highest ranking of an athlete from Ghana, placing seventh in both the T53 100m and T53 200m at the 2012 Games in London.

At the 2016 Paralympic Games in Rio de Janeiro, the Ghanaian team was made up of three athletes. They competed in athletics, cycling, and powerlifting.

Ghana is yet to win a medal since making its Paralympic Games debut at the 2004 Games in Athens, where three athletes were sent to compete in two sports.

The 2020 Tokyo Paralympic Games will run through to Sunday, September 5.