Apple, Google, Tesla and Microsoft are among firms named in a lawsuit seeking damages over deaths and injuries of child miners in the Democratic Republic of Congo.

The case has been filed by the International Rights Advocates on behalf of 14 Congolese families.

They accuse the companies of knowing that cobalt used in their products could be linked to child labour.

DR Congo produces 60% of the world’s supply of cobalt.

The mineral is used to produce lithium-ion batteries used to power electric cars, laptops and smartphones.

However, the extraction process has been beset with concerns of illegal mining, human rights abuses and corruption.

he lawsuit filed in the US argues that the tech companies had “specific knowledge” that the cobalt sourced for their products could be linked to child labour.

They say the companies failed to regulate their supply chains and instead profited from exploitation. 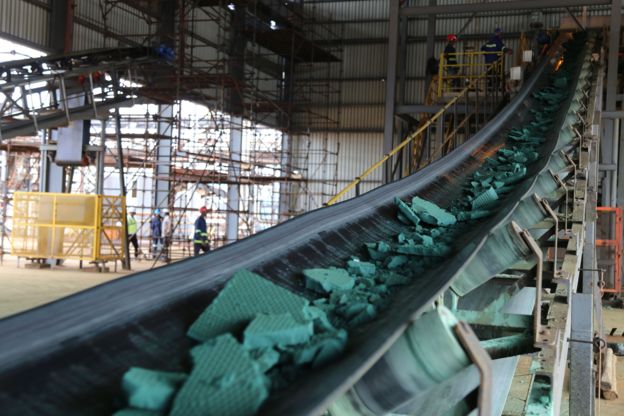 DR Congo produces more than 60% of the world’s cobalt

Other companies listed in the lawsuit are computer manufacturer Dell and mining companies, Zhejiang Huayou Cobalt and Glencore, who own the minefields where the Congolese families allege their children worked.

Glencore said in a statement to the UK’s Telegraph newspaper that it “does not purchase, process or trade any artisanally mined ore” adding that it also “does not tolerate any form of child, forced, or compulsory labour.”

The BBC has sought comment from Zhejiang Huayou Cobalt.

Video may contain some upsetting scenes

The court papers, seen by the UK’s Guardian newspaper, give several examples of child miners buried alive or suffering from injuries after tunnel collapse.

The 14 Congolese families want the companies to compensate them for forced labour, emotional distress and negligent supervision.

In a response to the Telegraph, Microsoft said it was committed to responsible sourcing of minerals and that it investigates any violations by its suppliers and takes action.

The BBC has also sought comments from Google, Apple, Dell and Tesla.