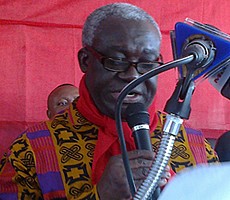 Organized labour has given the Public Utilities Regulatory Commission (PURC) and the government a 10-day ultimatum, beginning today, to slash the tariff increases to one-third.

The group says it will embark on a strike if the ultimatum is disregarded.

It says the PURC, acting under the influence of government, had failed to implement an agreement reached by all stakeholders three years ago, to increase utility tariffs on a graduated manner to minimise the impact on consumers.

The workers said for purposes of political expedience, the PURC waited and only a few weeks ago slapped exhorbitant tariff increases on consumers.

Secretary General of the Trades Union Congress, (TUC) Kofi Asamoah addressing a news conference at the GNAT Hall in Accra Tuesday said while the Union was not opposed to the increment in utility tariffs, the level of increment was simply unacceptable.

According to him, the prevailing economic conditions were so harsh that citizens' standards of living would be worsened should the government maintain the 52 percent increment in water and 78.9 percent in electricity tariffs.

“We have made it clear to the government that the prevailing income levels in the country do not allow us to pay such exorbitant increases; we simply cannot afford to pay.”

He wants the government to stop billing consumers with the new tariffs.

“Obviously the PURC and government have failed to heed our request to stay the implementation of the increases and to open genuine dialogue on the entire energy and water sectors.

“We are therefore left with very little choice to implement our own roadmap for getting the tariffs down to levels that are consistent with the income of Ghanaians.”

They are also calling government to come up with an elaborate plan for the payment of the 10% back pay increases before the year ends.