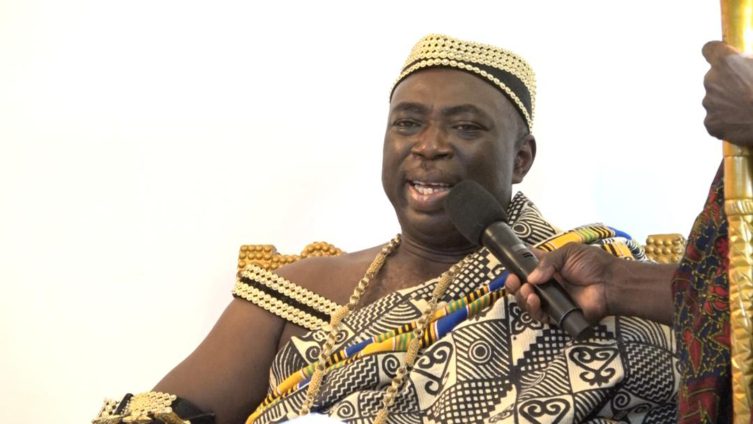 The Paramount Chief of Twifo Hemang, Nana Amoa Sasraku III, has made a passionate appeal to President Akufo-Addo to help the traditional area deal with its ‘landless’ state.

According to the chief, after nearly 50 years of government compulsorily acquiring their land, the traditional area has been left frustrated and without any piece of land to boast of.

While on his knees, the chief pleaded with the President to save the traditional area from the mockery and ridicule they are subjected to, even in the law court.

“Nana, we beseech you to help us. It is an embarrassment that we cannot boast of any land in our area after the compulsory acquisition. For that reason, a young lawyer embarrassed us in court one day. He called my predecessor a landless chief,” he said.

The chief said the utterance of the lawyer hurt the entire traditional area and called on the president to help them get their lands back.

The chief also asked the president to help them get a school for girls to produce role models for the girls in the community.

Nana Amoa Sasraku III indicated the Twifo Hemang Lower Denkyira District has the unenviable record of topping the teenage pregnancy statistics in the Central Region, something that ought to be tackled head-on.

“It’s sad to say that my district tops the teenage pregnancy rankings in the Central Region. Nana, this has to change.  And we need you to support us building a school for girls that would produce models for our girls in the various communities,” he said.

The chief praised the president for the various initiatives and interventions aimed at developing the country.

He stated: “Even in the absence of the luxury of time to state the life-changing interventions the President has instituted to the benefit of Ghanaians, I cannot be silent about the huge school projects that are dotted all around our communities; many of which are completed, whilst others are at varying stages of completion.”

The president cut the sod for the construction of a 12.1-kilometre road network from Twifo Hemang to Nsuaem.