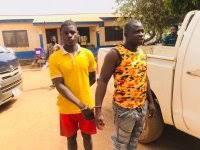 Two suspects identified as Gariba Neutori, 35 and Gmabani Gariba, 21 have been arrested by the Tatale-Sanguli District Police for allegedly trafficking children from Yeji in the Bono East Region to Togo.

The suspects were nabbed by the Police through the intervention of the Pan African Organisation for Research and Protection of Violence on Women and Children (PAORP-VWC), an NGO.

The child traffickers attempted trafficking a 10-year old from Prayen Aboah in the Yeji District to Togo.

Meanwhile, another suspect whose name remains unknown and alleged to be the major perpetrator in child trafficking in the Tatale District has absconded.

He said the Police would team with the NGO and relevant security services to investigate and apprehend the suspect now at large.

The Tatale District Police Commander,ASP Peter Paul Amoah, said Tatale has become the transit point for traffickers after recruiting victims in Yeji and indicated that it is difficult stopping them because they do not use the borders.

He said perpetrators must be severely sanctioned when caught, to deter potential human traffickers.

The Executive Director of the PAORP-VWC, Dr Peter Ndonwie, appealed for resources for the Department of Social Welfare to enable it provide adequate assistance in such circumstances.

DISCLAIMER: The Views, Comments, Opinions, Contributions and Statements made by Readers and Contributors on this platform do not necessarily represent the views or policy of Multimedia Group Limited.
Tags:
child trafficking in ghana
Gariba Neutori
Gmabani Gariba
Tatale