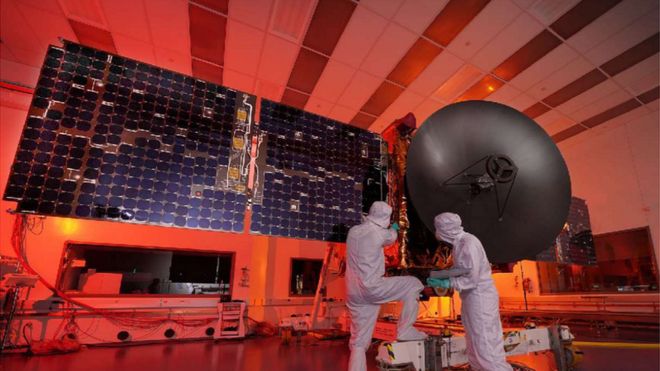 The first Arab space mission to Mars is preparing to lift off within weeks. Fuelling is due to begin next week.

It will take seven months to travel the 493 million km (308 million miles) to reach Mars and begin its orbit, sending back ground-breaking new data about its climate and atmosphere.

The probe will remain orbiting Mars for an entire Martian year, 687 days, to gather sufficient data.

A single orbit around Mars will take the probe 55 hours.

In a briefing on Monday, the programme’s science lead Sarah Al-Amiri said the project should be a major incentive for young Arab scientists to embark on a career in space engineering.

Named Amal, meaning Hope, the robotic craft is due to lift off from a remote Japanese island, Tanegashima, during a narrow launch window on 14 July.

Powered by a Japanese rocket, it will be carrying three types of sensors for measuring the complex make-up of Mars’s atmosphere. These include a high-resolution multiband camera for measuring the planet’s dust and ozone.

Second will be an infrared spectrometer for measuring the lower atmosphere and co-developed with Arizona State University, one of the project’s three US partner universities.

The third sensor will be an ultraviolet spectrometer for measuring oxygen and hydrogen levels.

Ms Al-Amiri said one of the focuses of the research will be into how these two elements, essential for water, are escaping from the planet.

Sir Ian Blatchford, director of the UK’s Science Museum Group, pointed out that “a lot of missions have focused on geology, but this will provide the most comprehensive, holistic picture of Mars’s climate”.

The UAE has a track record of space travel. It has sent satellites into the Earth’s orbit and one of its astronauts to the International Space Station.

The first Arab astronaut to go into space was Saudi Arabia’s Prince Sultan Bin Salman Al-Saud, who flew on the US space shuttle in 1985.

But this is of a totally different magnitude.

The spacecraft was assembled in Colorado and shipped to Japan, where all its engineers immediately had to go into quarantine due to the coronavirus pandemic, threatening to delay the launch.

Monica Grady, professor of planetary and space science at Britain’s Open University, believes this Mars mission marks a major change in an industry previously dominated by the major powers of the world.

“It’s a real step forwards for Mars exploration, because it shows that other nations – rather than the European Space Agency and Nasa can actually go there – well we hope it will get there. Mars has a very long history of mission failures,” she said.

UAE project leaders working on the mission have reminded the world that, eight centuries ago, Arab inventors and intellectuals were right at the forefront of scientific discovery.

So today, the ruler of Dubai, one of the seven emirates that make up the UAE, is hoping this ambitious project will rekindle a sense of cultural pride and help the region to diversify away from its dependence on the oil industry.

Provided it does reach Mars, Hope will arrive at the red planet in the same year that the UAE celebrates 50 years since its founding as a nation in 1971.

Certainly no one could accuse the country of lacking in ambition. It has vowed to build a human settlement on Mars by the year 2117.