Two in five adults would fake a sick day if they needed a day off, a BBC survey suggests.

When questioned on their morals and values, people admitted to lying about sickness, stealing and taking credit for other people’s work.

While younger staff lied more often than their elders, they were more willing to stand up for colleagues.

The average worker takes around four sick days a year, according to the National Office for Statistics.

The most common reasons for calling off work in 2018 were the common cold, musculoskeletal problems (like back pain), mental health conditions and “other” problems.

Sickness due to fibbing was unsurprisingly not included in the government’s statistics.

The UK-wide survey of 3,655 adults aged over 16, was conducted jointly by with market research firm ComRes.

The findings are part of a larger survey about what people in the UK find right and wrong.

As well as faking sickies, employees are often also prepared to cover for colleagues who they know might be faking it.

The survey found that 66% would not tell bosses if they knew their colleagues were absent, but not ill.

Hayley Lewis, an occupational psychologist, said it takes confidence to tell your boss you need a break, and if the relationship is bad, employees will tend to be less truthful. 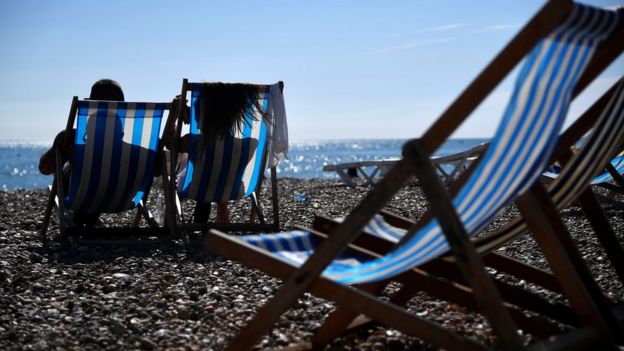 Two-thirds of workers would not tell bosses if they knew their colleagues were absent, but not ill.

Also, people can be influenced by their boss’ behaviour, she adds.

“We look to role models. If the boss is dragging themselves in, not taking breaks, eating lunch at their desk, it reinforces the message that it is not okay to take a break,” she says.

That often leaves employees only one option, Ms Lewis says – to ring up sick.

Men were almost twice as likely as women to say they would accept praise from a boss for work that someone else had done.

And almost a third said they stole work supplies like staplers and notebooks.

Standing up for women

The younger the employee, the more likely they were to speak up for women in the workplace.

Workers under 34 were more than twice as likely than older colleagues to turn to senior managers, or intervene. if they saw a male boss touch a female employee on the back during a meeting.

While 70% of younger adults would report or intervene if a senior figure in a company made sexual comments towards a younger colleague, less than half of people over 55 would do the same.