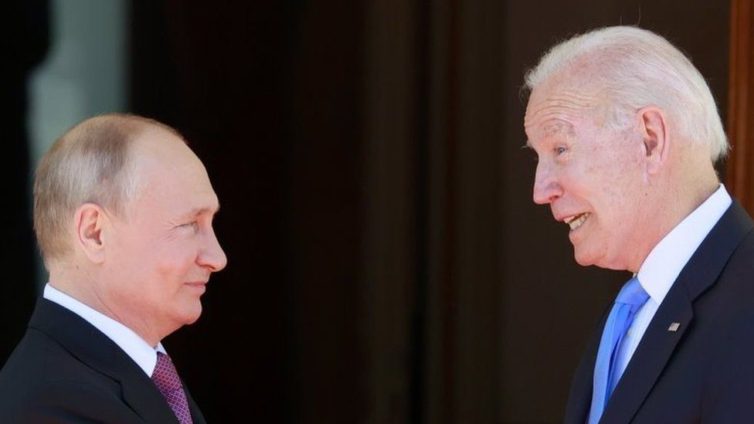 US President Joe Biden is set to hold talks with Russia’s Vladimir Putin for the second time this month, in a bid to de-escalate tensions over Ukraine.

The two leaders will speak by phone on Thursday evening.

They will discuss forthcoming security talks between the countries and the situation in Europe, a White House official said.

Russia, which has built up forces on the border with Ukraine, denies planning to invade the country.

It says its troops are there for exercises, and that it is entitled to move its troops freely on its own soil.

Hours before the call, Mr Putin told Mr Biden in a holiday message he was “convinced” the pair could work together based on “mutual respect and consideration of each other’s national interests”.

His spokesman, Dmitry Peskov, said Moscow was “in the mood for a conversation”.

The US consulted European leaders ahead of the call to co-ordinate a common response to the Ukraine issue, a White House statement said.

Ukrainian security officials say more than 100,000 Russian troops have been sent close to their shared border, and the US has threatened Mr Putin with sanctions “like none he’s ever seen” if Ukraine comes under attack.

Mr Biden will offer his Russian counterpart a “diplomatic path” but remains “gravely” concerned by the Russian troop build-up on the border, a US official told AFP news agency.

Mr Biden is expected to tell Mr Putin that the US is prepared to respond if Russia advances with “a further invasion of Ukraine”.

The US state department said Mr Blinken had “reiterated the United States’ unwavering support for Ukraine’s independence, sovereignty, and territorial integrity in the face of Russia’s military buildup on Ukraine’s borders”.

Earlier this month, the two presidents held a virtual summit in which Mr Biden reiterated his support for Ukraine’s sovereignty and territorial integrity.

While Ukraine is not a Nato member, it has close ties with the bloc.

Russia has said it wants legally binding guarantees that Nato will not move eastwards and that weapons will not be sent to Ukraine or any neighbouring countries.

Nato Secretary-General Jens Stoltenberg has been adamant that Ukraine’s membership of the alliance is a matter for Nato and Kyiv. “Any dialogue with Russia has of course to respect the core principles which European security has been based on,” he previously said.

Lithuanian President Gitanas Nauseda has described the current situation as probably “the most dangerous it’s been in 30 years”.

Russian officials are due to meet US counterparts in Geneva on 10 January. Asked earlier this week if he would meet Mr Putin on that date, Mr Biden replied “We’ll see”, but he is not expected to attend the talks in Geneva.