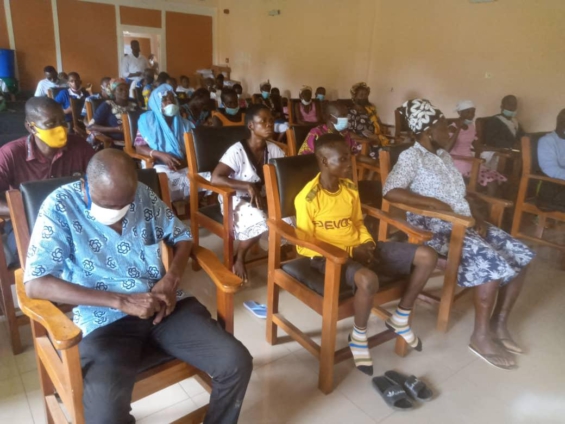 Upper West Akim District Assembly, has distributed a number of items and an amount of  GH₵ 33,000.00, to 50 Persons with Disability (PWDs), in the district to enhance their livelihoods.

The money is to enable them undertake sustainable economic ventures for self-reliance.

The beneficiaries were made up of 30 physically challenged, 8 visually impaired and 12 deaf and dumb individuals, selected across the district based on approved criteria and guidelines of the Department of Social Welfare.

The physically challenged, visually impaired and the deaf and dumb persons each received a cheque of GH¢1,600.00 and GH¢1,7000.00 to either expand or establish their businesses.

Others were given wheel chairs and a walking aid and a white cane.

Acting District Chief Executive for Upper West Akim, Mr. Eugene Sackey who presented the items announced that the disbursement of the PWDs share of the Common Fund was part of government’s intervention to ensure that every individual Ghanaian becomes self-reliant.

He stated that individual beneficiaries had made requests to the Assembly for the items they needed, hence, the need to make good use of them to earn a living, instead of seeking white colour jobs and also depending on others all the time.

The District Coordinating Director, Mr. Samuel Antwi Boasiako stated that the presentation was the fifth to be held by the Assembly in support of PWDs, adding that, the donation was to assist improve their total well-being.

He asked them not to sell the items presented to them, but use them for the purpose of which they were intended.

He added that the Assembly will dispatch a monitoring team to their localities to ascertain how they were using the items and the monies given them.

Adeiso District Chairman of the PWDs, Mr. Clement Kaba thanked the government and the Assembly for the gesture and assured them that they will put them to good use to better their lot.

DISCLAIMER: The Views, Comments, Opinions, Contributions and Statements made by Readers and Contributors on this platform do not necessarily represent the views or policy of Multimedia Group Limited.
Tags:
PWDs
Upper West Akim District