The US federal government’s move to resume executions after a 16-year hiatus has drawn sharp criticism from rights groups and leading Democrats.

Several candidates for the Democratic presidential nomination called for the death penalty to be abolished.

They had been convicted of murders or rapes of children or the elderly, he said.

The executions have been scheduled for December 2019 and January 2020.

“Under administrations of both parties, the Department of Justice has sought the death penalty against the worst criminals,” Mr Barr said in a statement. “The Justice Department upholds the rule of law – and we owe it to the victims and their families to carry forward the sentence imposed by our justice system.”

Mr Barr’s announcement lifts what was an informal moratorium on the federal death penalty – as opposed to state-directed executions – since the 2003 execution of Louis Jones Jr, a 53-year-old a Gulf War veteran who murdered 19-year-old soldier Tracie Joy McBride.

Robert Dunham from the Death Penalty Information Center said the decision did not come as a surprise.

“President Trump has been a staunch supporter of capital punishment and has proposed several extreme uses of it, including for selling drugs and for all murders involving state and local police officers,” he said.

“So it was not a surprise that he would seek to have executions carried out. I think the biggest surprise is that it took as long as it did.” 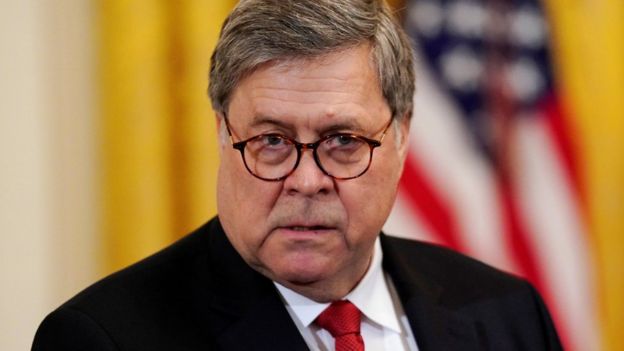 Image caption“The justice department upholds the rule of law and we owe it to the victims and their families,” said Attorney General William Barr

Meanwhile the American Civil Liberties Union (ACLU) said the fact that the executions were scheduled so close together raised “serious questions about the fairness for each of those cases”.

“We need time to consider and review cases and there’s just absolutely no basis for lumping cases together in this way and rushing forward,” said Cassy Stubbs from the group.

Democrat Kamala Harris described the death penalty as “immoral and deeply flawed”, while Bernie Sanders said he would abolish it if elected.

Another candidate for the Democratic presidential nomination, Pete Buttigieg, said “race and geography” were factors in determining who was sentenced to death.

Who is the US government planning to execute?

They are Daniel Lewis Lee, a white supremacist who was convicted in Arkansas of murdering a family of three; Lezmond Mitchell, a Native American who was convicted in Arizona of murdering a grandmother and her granddaughter; Wesley Ira Purkey, who raped and murdered a teenage girl; Alfred Bourgeois, who sexually molested and killed his young daughter; and Dustin Lee Honken, who shot five people dead. 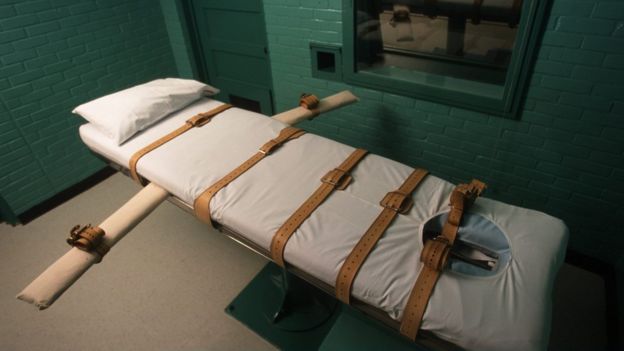 Mr Barr is to allow the prison authorities to use the single drug Pentobarbital in place of a three-drug procedure previously used in federal executions. The drug is a potent sedative that slows down the body, including the nervous system, to the point of death.

When do federal courts hand down death sentences?

Under the US justice system, crimes can be tried either in federal courts – at a national level – or or state courts, at a regional level. Certain crimes that apply nationally, such as counterfeiting currency or mail theft, are automatically tried at a federal level, while others are tried in federal courts based on the severity of the crimes.

According to data collected by the Death Penalty Information Center, 78 people were sentenced to death in federal cases between 1988 and 2018 but only three have since been executed. There are 62 inmates currently on federal death row.

They include Dylann Roof who murdered nine people in a Charleston church in 2015, and Dzhokhar Tsarnaev, who was convicted of the 2013 Boston Marathon bombing.