The US Department of the Treasury has imposed sanctions against Iranian Foreign Minister Mohammad Javad Zarif.

The sanctions freeze any assets of Mr Zarif in America, or controlled by US entities, the department said.

Mr Zarif tweeted the US had imposed sanctions on him because it considered him as a threat to its agenda.

Tensions between the US and Iran have heightened since the US last year withdrew from the 2015 nuclear deal that aimed to curb Iranian nuclear activities. 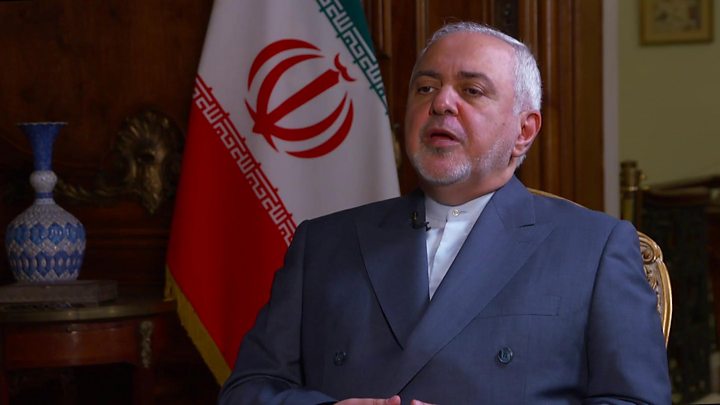 – Iran’s Foreign Minister: We cannot leave our own neighbourhood

There are also growing concerns that a number of recent incidents in the Gulf could lead to a military conflict in the vital shipping region.

What did the US say?

“The United States is sending a clear message to the Iranian regime that its recent behaviour is completely unacceptable.

“At the same time the Iranian regime denies Iranian citizens’ access to social media, Foreign Minister Javad Zarif spreads the regime’s propaganda and disinformation around the world through these mediums,” Mr Mnuchin said.

Despite the sanctions, Mr Zarif will still be able to travel to New York on official UN business, the BBC’s Gary O’Donoghue in Washington reports.

So long as there remains little prospect of any talks between Washington and Tehran, the question of who to negotiate with is somewhat academic, our correspondent adds.

How did Mr Zarif respond?

Mr Zarif said the US move “has no effect on me or my family, as I have no property or interest outside of Iran”.

“The US reason for designating me is that I am Iran’s ‘primary spokesperson around the world. Is the truth really that painful?” he asked.

“Thank you for considering me such a huge threat to your agenda.”

Last year, the US unilaterally withdrew from the agreement between Iran and world powers.

Washington has since reimposed tight sanctions affecting the Iranian economy, and also

The other parties of the 2015 deal – China, France, Germany Russia and the UK – criticised Mr Trump’s decision and said they remained fully committed to the deal.

Iran responded by breaching the limit on its stockpile of low-enriched uranium set under the nuclear deal.

Tehran stepped up production of enriched uranium, used to make reactor fuel but also potentially nuclear bombs, in May.

Last week, talks were held in Vienna to try to save the nuclear deal.

After meeting representatives from Britain, France, Germany, Russia and China, a senior Iranian official said the atmosphere had been “constructive”.

And what about recent tanker incidents?

Tensions between the UK and Iran rose in July after British forces seized the Iranian tanker, Grace 1, off Gibraltar. It was alleged to be carrying oil to Syria in breach of EU sanctions, a claim denied by Iran.

Several days later the British-flagged Stena Impero was impounded by Iran, which said it had been “violating international maritime rules”.

Britain sent a second warship on Sunday to escort its ships sailing through the Strait of Hormuz.