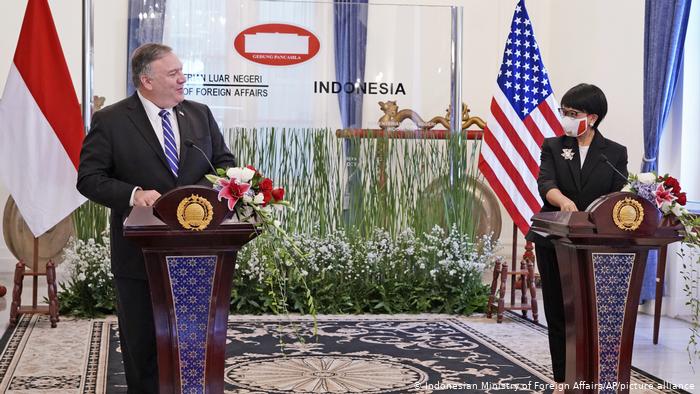 US Secretary of State Mike Pompeo is on a tour to forge new alliances in Asia, with Indonesia high on his list. Washington, which is increasingly at odds with Beijing on regional issues, aims to build new bridges.

US Secretary of State Mike Pompeo underlined US interest in cooperating with Indonesia in the South China Sea during a visit to Jakarta on Thursday.

“I am looking forward to co-operating together in new ways to ensure maritime security protects some of the world’s busiest trade routes,” Pompeo told a joint press conference with his Indonesian counterpart Retno Marsudi.

China, Brunei, Vietnam, the Philippines, Malaysia, and Taiwan have overlapping claims to parts of the South China Sea — one of the most important trade routes in the world. Jakarta has often positioned itself as an “honest broker” in these disputes but has clashed with Beijing over its own exclusive economic zone, for example when it comes to fishing.

Ahead of the US election, Pompeo repeated past assertions against China, with which US relations have deteriorated in recent times. He praised Indonesia’s efforts to safeguard its interests while slamming China’s “unlawful” claims.

Pompeo is expected to meet Indonesian President Joko Widodo and also address an Islamic youth group on his visit.

Pompeo is on a five-nation tour in Asia, to strengthen US relations in the region. Prior to visiting Indonesia, he visited India, Sri Lanka, and the Maldives. He will be flying to Vietnam later on Thursday.