Users of Accra-Kasoa road call for permanent solution to traffic congestion caused by flooding around the Old Barrier - MyJoyOnline.com 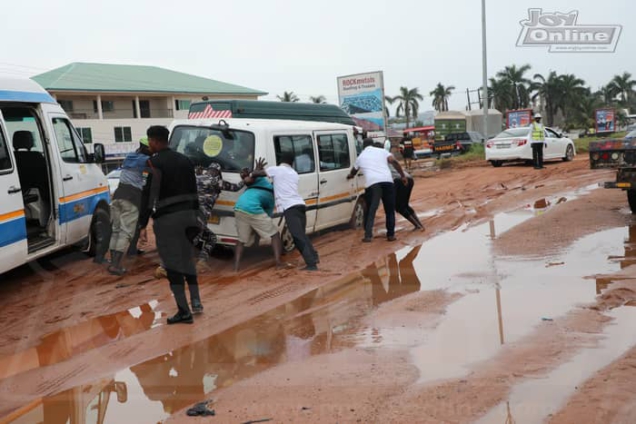 The heavy downpour which hit Accra and its environs overnight, has resulted in a heap of sand on the Atala stretch of Accra-Kasoa road, near the old barrier.

Some vehicles, including Burkina Faso-Abidjan bound articulated trucks, got stuck, the affected drivers therefore spent the night on the road.

The heap of sand narrowed the dual carriage road into a single lane while the usual Monday morning traffic on that road worsened the situation. Recalcitrant drivers who ignored Police instructions and drove through the sand, got stuck.

Though the location is a known flood-prone area, this incident has been described as worst, as a storm drain that collects water from the Aplaku and Red Top mountains, is silted and volumes of water kept gushing out onto road.

Residents whose houses and work places have been flooding, are calling on government as a mater of urgency to find an immediate solution to the problem. According to them, proper drainage will be the lasting solution and any delay will put their lives in danger especially this rainy season.

In an interview, a commercial driver who pleaded anonymity, told myjoynline.com that the challenge causes damage to their cars.

He said as early as 5:30am on Monday, the traffic from the Atala area extended to Galilea, a suburb of Ngleshie Amanfro.

Commercial motor riders, also known as Okada, had a field day as passengers who dreaded getting to work late engaged their services.