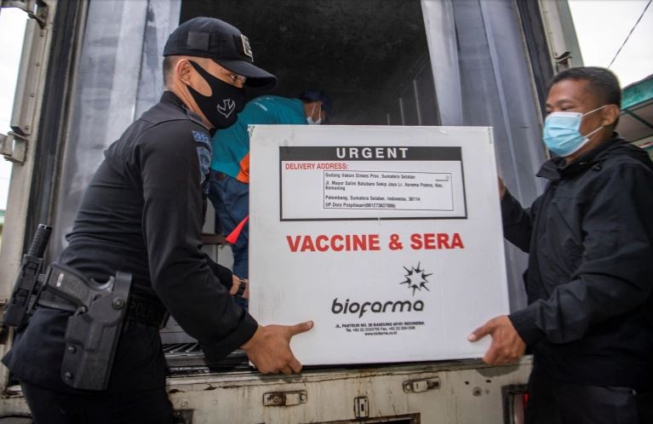 Jakarta, Indonesia – Questions about the potential use of pork products in vaccines is compounding vaccine hesitancy in Indonesia, experts have warned, urging officials and Muslim leaders in the Southeast Asian nation to speed up efforts to gain public trust ahead of a mass immunisation campaign against Covid-19.

Pork-derived gelatin is used as a stabiliser in some vaccines. But the consumption of pork is strictly forbidden or “haram” to Muslims, who comprise 87 percent of Indonesian’s 273 million people, raising concern this may hamper vaccination in the Southeast Asian nation worst-affected by covid-19.

Dr Dicky Budiman, an epidemiologist who has helped formulate the Indonesian Ministry of Health’s pandemic management strategy for 20 years, said a halal certification for covid-19 vaccines was essential.

“Halal is about more than just food – it incorporates more every aspect of lifestyle for observant Muslims,” said Budiman.

“If you are doing business, you must do it in a halal way and not cheat people. With regards to vaccines, halal certification is virtually mandatory in Indonesia because it ensures the production process from beginning to end is in line with Islamic teaching.”

Indonesia’s government has been commended by health experts for not pinning its hopes on just one covid-19 vaccine.

The government is yet to approve a single vaccine candidate, however.

AstraZeneca, Novavax and Pfizer have all said there are no pork products in their vaccines. But Sinovac has refused to disclose the ingredients of its COVID-19 vaccine or specifically say if it has pork gelatin.

The MUI, Indonesian’s top Muslim clerical body that makes decisions over halal certification, also appears to be asleep at the wheel.

It completed its study of Sinovac’s vaccine a month ago but has not yet announced its decision.

“Many people in Indonesia believe in conspiracy theories about COVID-19 and one of the reasons for that is the government has had no clear, strategic communication campaign,” Budiman said.

“Sinovac also needs to be very clear about the ingredients of its vaccine and the MUI should announce its decision about the halal certification without further delay.”

Indonesia, which has reported more than 758,000 COVID-19 infections and more than 22,500 deaths since the beginning of the pandemic, has already received three million doses of the Sinovac vaccine and expects to receive doses from AstraZeneca and Pfizer in the coming weeks.

But with authorisation and halal certifications for the vaccines still pending, it is not clear when the country may roll out its inoculation programme.

Ahmad Utomo, a molecular biological consultant in Jakarta specialising in the diagnosis of lung infections, said the government’s failure to quell concerns about pork products in vaccines is a textbook example of its failure to communicate with the public throughout the pandemic.

“The issue is one of public trust. There is a deep distrust against the government when it comes to covid-19 that was exacerbated by poor scientific communication by Purwanto in the early stages of the pandemic,” he said, referring the former Indonesian health minister who infamously said the country was immune from covid-19 because of prayer.

“Aggressive gestures of the certain government officials for vaccinations to start in November when there were no signs of vaccine efficacy nor BPOM [Indonesia’s agency for drug and food control] approval were also unproductive,” he said. “Scientists have been caught in the middle. It’s been a mess.”

Vaccine hesitancy has been on the rise in Indonesia for many years and has been further exacerbated during the pandemic, according to the World Health Organization (WHO).

A survey it conducted in August with Indonesia’s Ministry of Health found that 27 per cent of respondents were hesitant to take a covid-19 vaccine – a group the survey said was “crucial for a successful vaccination programme”.

Their reasons ranged from religious beliefs, fear of side effects from vaccines and uncertainty about the effectiveness of covid-19 vaccines.

“I am not sure I will take it because my aunt told me it had pork,” Vita, an observant Muslim in West Kalimantan province who like many Indonesians goes by only one name, told Al Jazeera. “Maybe it’s OK for Muslims to have it if there is a specific purpose. But I would have to study the Quran to find the answer.”

But Sadiyah said halal certification does not worry her. “I’m more worried about the other ingredients. Will it make me healthy or sick? Because right now I am healthy.”

“Many people are contra- and many are pro-vaccines. There is no agreement,” she said. “But the doctors I talk to every day, they tell me they won’t trust them until they have passed all the clinical trials.”

The joint WHO-health ministry survey also found one-third of Indonesians who want to be immunised for covid-19 were unwilling or unable to pay for it. Before he was replaced in a cabinet shuffle in December, former Health Minister Terawan Agus Putranto said the government plans to cover the cost for only 30 percent of the 107 million people marked out to receive covid-19 vaccines by 2022.

Following public backlash President Joko Widodo jumped into the fray, saying covid-19 vaccines will be free for all Indonesians.

“But the government should have a clear strategic communication policy to address the ‘info-demic’ and provide the public with accurate data about the effectiveness and risks of every vaccine to stop rumours from growing,” he said.

“That way it can be left up to the individuals to decide if they want to be vaccinated or not.”

The MUI is expected to approve COVID-19 vaccines that contain pork gelatin, citing the greater good. But if the Indonesian public’s past reaction to other vaccination programmes is anything to go by, accepting the coronavirus scheme could prove difficult.

Between 2017 and 2018, Indonesia undertook the world’s largest vaccination campaign against measles and rubella. More than 67 million children were jabbed with a new combined measles-rubella (MR) vaccine from India.

The first phase in 2017 was a success, with more than 35 million children vaccinated on the main island of Java. Measles and rubella cases dropped by more than 90 percent.

But things turned south in 2018 when the MUI on the Riau Islands, an archipelago scattered between Sumatra and the Malay Peninsula, alleged that the MR vaccine contained pork gelatin and was therefore forbidden.

The MUI in Jakarta issued a statement backing that assessment and subsequently, in Sumatra, the second-most densely populated island in Indonesia, the MR immunisation uptake dropped to 68 percent.

In Aceh, an ultra-conservative Muslim province on Sumatra’s northwest tip, participation dropped to just 8 percent, according the Ministry of Health.

The MUI tried to backtrack with a follow-up statement saying the MR vaccine permitted for use by Muslims. But by then, measles cases had spiked.

By 2019, Indonesia had gone back to where it was before the campaign with the third-highest rate of measles in the world.

Seminal British medical journal The Lancet said vaccine hesitancy was on the rise globally and Indonesia’s experience with the MR vaccine was cautionary.

“Political leaders and health ministries must continue dialogue with religious scholars and communities to generate both a common understanding and unambiguous messaging regarding the benefits of immunisation,” the journal said.

“The health and survival of Indonesia’s children depend on it.”

DISCLAIMER: The Views, Comments, Opinions, Contributions and Statements made by Readers and Contributors on this platform do not necessarily represent the views or policy of Multimedia Group Limited.
Tags:
Coroanavirus vannine
Covid-19 pandemic
Indonesia