Vanessa Bryant on losing Kobe and Gigi: ‘They couldn’t be on this earth without each other’ 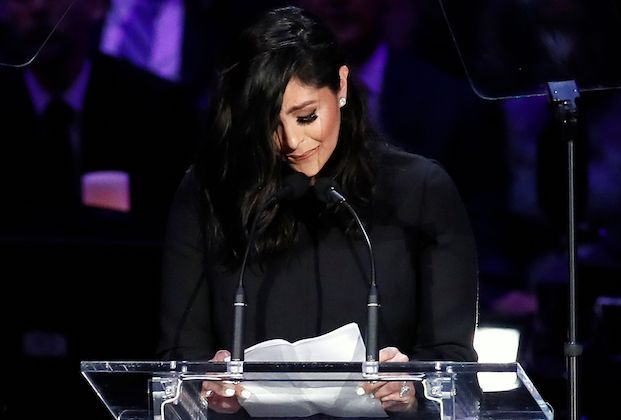 Vanessa Bryant is remembering her husband, Kobe Bryant, and their 13-year-old daughter, Gianna.

Vanessa attended Kobe and Gianna’s memorial on Monday at the Staples Center in Los Angeles, where she spoke publicly for the first time since their tragic deaths on Jan. 26. Kobe and Gianna, as well as seven other victims, died after a helicopter crash in Calabasas, California.

“Thank you so much for being here. It means so much to us, the outpouring of love and support from around the world has been so uplifting,” she said before first sharing memories of Gianna. “My baby girl, Gianna Bryant, is an amazingly sweet and gentle soul. She was always thoughtful. She would always kiss me goodnight and kiss me good morning.”

“She was daddy’s girl but I know she loved mama, and she would always show me and tell me how much she loved me,” she continued. “She was one of my very best friends.”

She remembered that Gianna loved baking and was competitive like her father.

“Her smile was like sunshine,” she shared. “Her smile took up her entire face like mine. Kobe always said she was me. She had my fire, my personality and sarcasm. She was tender and loving on the inside. She had the best laugh. It was infectious, it was pure and genuine. Kobe and Gianna naturally gravitated toward each other.”

Vanessa praised Gianna as a great athlete and noted that she was also great at academics, and had so much “swag.”

“She was a nice person, a leader, a teacher … she gave the best hugs and kisses,” she remembered, fighting back tears. ” … I miss looking at her beautiful face.”

“We will not be able to see Gigi go to high school with [her sister] Natalia and ask her how her day went,” she continued, breaking down in tears. “We didn’t get the chance to teach her how to drive a car. I won’t be able to tell her how gorgeous she looks on her wedding day. I’ll never get to see my baby girl walk down the aisle, have a father-daughter dance with her daddy, dance on the dance floor with me or have babies of her own. Gianna would’ve been an amazing mommy.”

“She was very maternal ever since she was really little. Gigi would’ve most likely become the best player in the WNBA. She would’ve made a huge difference — she would’ve made a huge difference for women’s basketball. Gigi was motivated to change the way everyone viewed women in sports. She wrote papers in school defending women and wrote about how the unequal pay difference in the NBA and WNBA leagues was unfair. I truly feel she made positive changes for the WNBA players now since they knew Gigi’s goal was to eventually play in the WNBA.”

Then, she emotionally remembered her late husband.

“Now, for my soulmate. Kobe was known for being a fierce competitor on the basketball court, the greatest of all time, a writer, and Oscar winner and the Black Mamba, but to me, he was Kob-Kob, my boo-boo, may bae-boo, my papi chulo,” she said through tears. “I was his vee-bee, his principesa, his reina, his queen mamba.”

“I couldn’t see him as a celebrity, nor as an incredible basketball player, he was my sweet husband and the beautiful father of our children. He was mine. He was my everything. Kobe and I have been together since I was 17 and a half years old. I was his first girlfriend, his first love, his wife, his best friend, his confidant and his protector. He was the most amazing husband. Kobe loved me more than I could ever express or put into words.”

She spoke about his romantic side.

“He was charismatic, a gentleman,” she remembered. “He was loving, adoring and romantic. He was truly the romantic one in our relationship. I looked forward to Valentine’s Day and our anniversaries every year. He planned special anniversary trips and a special traditional gift for every year of our marriage. He even hand made my most treasured gifts. He just thought outside the box and was so thoughtful even when working hard to be the best athlete.”

She revealed that he actually bought her Rachel McAdams‘ blue dress from The Notebook.

“When I asked him why he chose the blue dress, he said it was because it’s the scene when Ali comes back to Noah,” she shared. “We had hoped to grow old together like in the movie. We really had an amazing love story. We loved each other with our whole beings. Two perfectly imperfect people making a beautiful family and raising our sweet and amazing girls.”

She called him the “MVP of Girl Dads.”

“He always knew there was room for improvement and wanted to do better,” she shared. “He happily did carpool and enjoyed spending time in the car with our girls. He was a doting father — a father that was hands on and present. He helped me bathe Bianka and Capri almost every night. He would sing them silly songs in the shower and continue making them laugh and smile as he lathered them in lotion and got them ready for bed. He had magic arms and could put Capri to sleep in only a matter of minutes.”

“He said he had it down to a science — eight times up and down our hallway. He loved taking Bianka to Fashion Island and watch her play in the koi pond area and he loved taking her to the park. Their most recent visit to the koi pond was the evening before he and Gigi passed. He shared a love of movies and a breakdown of films with Natalia. He enjoyed renting out theatres and taking Natalia to watch the newest Star Wars movie or Harry Potter films. And they would have movie marathons and he would enjoy every second of it. He loved your typical tear-jerkers too. He liked watching Stepmom, Steel Magnolias and Little Women. He had a tender heart.”

She said Kobe knew where she was at all times, even when she was late to his games. And now she mourns all the memories he won’t be able to be a part of.

“But I want my daughters to know and remember the amazing person, husband and father he was. The kind of man that wanted to teach the future generations to be better and to keep them from making his own mistakes. He always like working and doing projects to improve kids’ lives.”

Vanessa broke down in tears when she talked about Kobe and Gianna dying together.

“God knew they couldn’t be on this earth without each other,” she said. “He had to bring them home to him together. Babe, you take care of our Gigi. I got Natalia, Bianka and Capri. We’re still the best team. We love and miss you boo-boo and Gigi. May you both rest in peace and have fun in heaven until we meet again. We love and miss you forever and always.”

Vanessa, 37, has been mourning her devastating loss on Instagram, which she made public after Kobe and Gianna’s deaths. Vanessa met Kobe during a music video shoot in 1999 while she was still in high school and he was just 20 years old. They got engaged when she turned 18, and they got married in April 2001.

On Jan. 29, Vanessa spoke out about how she and her daughters — 17-year-old Natalia, 3-year-old Bianka and 8-month-old Capri — were coping with their unfathomable family loss.

“We are completely devastated by the sudden loss of my adoring husband, Kobe — the amazing father of our children; and my beautiful, sweet Gianna — a loving, thoughtful, and wonderful daughter, and amazing sister to Natalia, Bianka, and Capri,” she wrote in part. “There aren’t enough words to describe our pain right now. I take comfort in knowing that Kobe and Gigi both knew that they were so deeply loved. We were so incredibly blessed to have them in our lives. I wish they were here with us forever. They were our beautiful blessings taken from us too soon.”

“I’m not sure what our lives hold beyond today, and it’s impossible to imagine life without them,” she continued. “But we wake up each day, trying to keep pushing because Kobe, and our baby girl, Gigi, are shining on us to light the way. Our love for them is endless — and that’s to say, immeasurable. I just wish I could hug them, kiss them and bless them. Have them here with us, forever.”