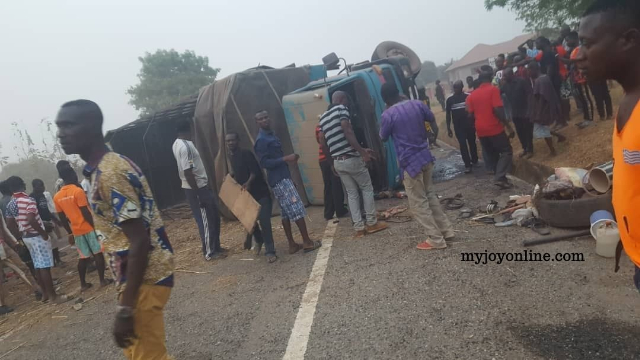 Victims of the Krachi accident that claimed the lives of over 10 people are calling on government and the general public to urgently come to their aid.

The plea comes after victims of the accident were unable to receive proper medical treatment as a result of financial constraints.

Youth President of the community told JoyNews’ Peter Senoo that the victims have resorted to the use of local medication for treatment.

“If you look at the degree of injuries they have sustained, it’s beyond the assistance we are giving them,” he said.

Eleven persons died in an accident that occurred last Saturday at Krachi in the Krachi West District of the Oti Region.

Fifty-one others who were in critical conditions were rushed to the hospital.

According to reports from a victim, some of the passengers were Seventh Day Adventist (SDA) students who were returning from the funeral of their headmaster, Theo Yaw John.

Confirming the latest figures, Acting Medical Superintendent at the Krachi Government Hospital, Dr. Edmund Tagoe disclosed to the reporter that many of the injuries are life-threatening.

“We had to take care of about 50 patients with all kinds of injuries and some near-death injuries so I don’t think we could have been prepared enough for that. Currently, ten deaths have been recorded. There are 54 on admission with a few in critical condition,” he said.

The youth president of Krachi, however, added that victims of the accident have resorted to cheaper means of treatment as they cannot afford the prescribed medication issued by medical doctors.

“Some have been referred, some have fractures and they have been asked to go to the respective hospitals where they could have proper attention but because they don’t have money they are doing this local treatment,” Hastens told JoyNews.

The victims are appealing to the general public for urgent support.