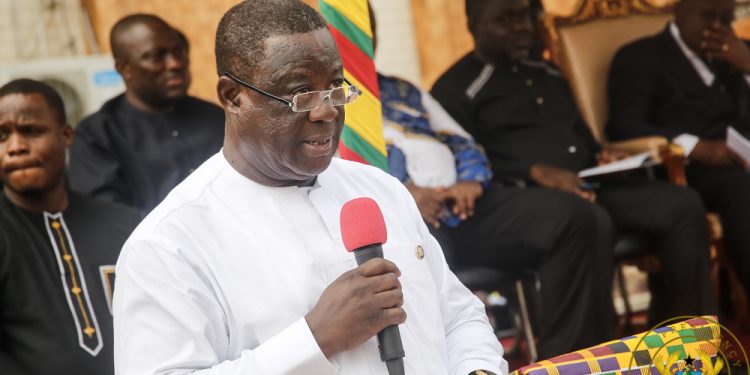 A groundbreaking ceremony has been held at Krachi West District in the Oti Region, to mark the commencement of works on some roads.

The project, which will include asphalting a 15kilometres road, is expected to be completed in 24 months.

On matters of interest to Nana Mprah  Besemuna III, the Road Minister stated that a Dutch company called FDN Group made a proposal to the Highways Ministry for the construction of a bridge over the Oti River.

The Minister said, pre-feasibility studies have been completed and financial terms under examination at the Ministry of Finance.

He explained that his sector is waiting for a ‘no objection’ letter from the Finance Ministry before they could negotiate the construction agreement which will be brought to Cabinet and subsequently to Parliament for approval before the end of the year.

Nana Mprah Besemuna III, Krachi-Wura thanked the President for the initiative which was promised during the inauguration of the Oti Region.

He said the people of the area are aware of the good works the President was undertaking and promised that they would show their appreciation at the December polls.

Nana Besemuna reminded President Akufo-Addo about his promise of establishing a University in the Oti Region in its second term should he win the December elections.

Speaking to the Ghana News Agency, some drivers, who used that corridor said awarding the contract was only one segment of the project, and completing it was their problem.

The drivers called on the government to ensure that the contractor remained on-site to complete the project on schedule.

DISCLAIMER: The Views, Comments, Opinions, Contributions and Statements made by Readers and Contributors on this platform do not necessarily represent the views or policy of Multimedia Group Limited.
Tags:
infrastructure development
Krachi West District
Minister for roads and highway
Roads and Highways Minister