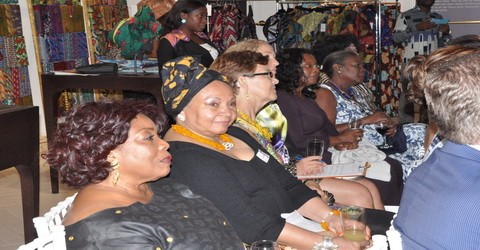 Vlisco Group, a leading designer and manufacturer of fashion fabrics in West Africa, has joined the fight against Malaria in Ghana.

The Holland fabric maker in collaboration with Infanta Malaria Foundation (IMF) held a fundraising auction to support the fight against child malaria over the weekend.

The Infanta Malaria Prevention Foundation (IMF), a non-profit non-governmental organization based in Ghana.

Founded in February 2005, IMF has established a malaria prevention and treatment program in Atorkor in the Volta region.

The auction held at the Vlisco shop at the Accra Mall brought together women of class and noble hearts to contribute their quota to help eradicate the dreadful diseases especially in children.

In a relaxed atmosphere, the auction was characterized by a fashion show with patrons bidding for specially designed dresses by selected designers like PoquaPoqu and Amayo.

Aside the designed dresses, other items in the shop were discounted to enable patrons purchase items to support the Infanta Malaria project.

Speaking at the event, the 2012 Vlisco Ambassador and Chief Executive Officer of L’AINE Services Limited, Ellen Hagan lauded Vlisco and Infanta Malaria for the initiative.

She said the malaria menace is a huge challenge for Ghana which needs greater attention from government for a lasting solution.

The Vlisco Ambassador urged all, especially women, to support the fight against malaria which is robbing the nation of its potential resource base.

Helen Hagan disclosed that Vlisco will soon launch an Africa-Wide Campaign to create awareness, educate and engage consumers in the fight against counterfeiting, which is a bane to the fabric industry.

On her part, Deputy Administrator for the Infanta Malaria Foundation, Ruth Nylander underscored the need for government to look for a holistic approach to combat the malaria menace.

She said IMF has a unifying goal of combating malaria through collaboration with leaders in malaria research and through educational and social projects across urban and rural Ghana.

Ruth Nylander expressed appreciation to Vlisco for the support and called on all Ghanaians to contribute to the aim to eradicate malaria in Ghana.