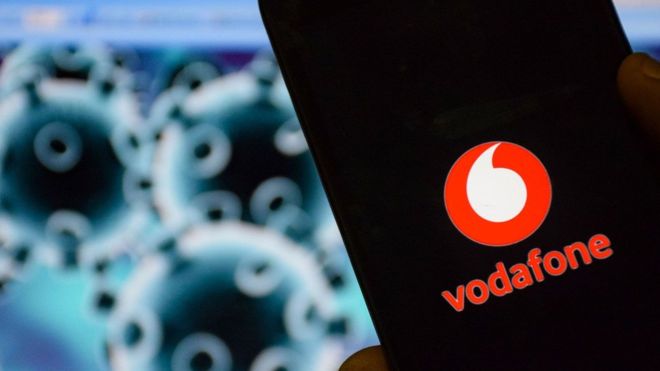 Vodafone admitted the timing of its price hike was unfortunate

Vodafone UK is offering free unlimited mobile data to half a million of its pay monthly customers.

The mobile network said it was doing so as part of its support measures during the coronavirus pandemic.

Customers considered “vulnerable” will be automatically upgraded, it said, while others can apply.

It comes a day after Vodafone faced criticism for announcing price increases during the crisis.

Many mobile operators and other services raise their prices in April each year, by an amount linked to inflation.

Other phone operators had already announced their price increases before people began to lose their jobs during the coronavirus shutdown.

“We appreciate now is not a good time to be communicating a price rise,” a spokesman said of the 2.5% increase.

The “vulnerable” customers who will automatically be upgraded to the unlimited data scheme include those with declared disabilities or mental health issues, “among other things”, a Vodafone spokesman said. Those customers will receive a text telling them about it.

Another half a million will be able to apply for the free 30 days through Vodafone’s rewards scheme in the company’s app.

The initial limit will be opened up later if the network has the capacity to do so, with Vodafone saying it will monitor usage during the first wave.

The offer is likely to be taken up quickly, said analyst Kester Mann from CCS Insight.

“It will be well received by many following the unfortunate timing of a planned RPI-linked price rise announced yesterday,” he said.

He said mobile operators, which have traditionally had low levels of consumer trust, were keen to take measures to keep people connected during the pandemic.

Vodafone’s move is not free for the company, he said, since “any increase in data usage will have some cost impact”. The plan would only pay off in future if people who have unlimited data realise its benefit and move to an unlimited data plan in future.

“Maybe more than ever, this is a great opportunity for the telecom industry to enhance its reputation.”

It has not, however, all been plain sailing. On 17 March, just as many people were beginning to work from home, the UK’s mobile operators suffered a widespread service problem which prevented people from different networks contacting each other.